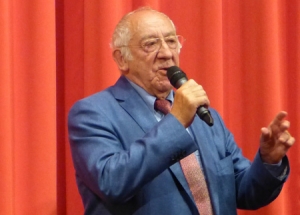 Dieter Hallervorden in the Deutsches Filmmuseum, Frankfurt am Main, on August 26, 2014

Dieter Hallervorden, born September 5, 1935, in Dessau, fled the GDR in 1958 during his time at university. He then continued to study theatre studies and journalism in West Berlin and scraped along with occasional jobs as a tourist guide or as a brewery worker. When his applications for "Berlin Max-Reinhardt-Schauspielschule" and for the political satire cabaret group "Die Stachelschweine" got rejected, Hallervorden set up his own cabaret group "Die Wühlmäuse" without further ado in 1960. Hallervorden runs "Die Wühlmäuse" until today. At the same time, in 1960, Hallervorden dropped out of university and took private acting lessons with Marlise Ludwig.

In 1960, Hallervorden also made his movie debut in the tiny role of a photo reporter in Fritz Lang's film "Die 1000 Augen des Dr. Mabuse" ("The Thousand Eyes of Dr. Mabuse"). Besides his work on stage, Hallervorden was repeatedly seen in movie and TV productions, in comedic as well as in dramatic roles, from the end of the 1960s on.

Dieter Hallervorden played one of his most memorable and unusual roles in 1970 in "Das Millionenspiel" ("The Millions Game"). In Tom Toelle's and Wolfgang Menge's dark media satire, he played the head of a gang of killers that hunts the participants of a cynical TV show. Besides further dramatic roles, for instance, in the "Tatort" episode "Rattennest" (1972), or as an escaped psychopath in the TV thriller "Der Springteufel" (1974), Hallervorden became an established comedian and satirist in TV series like "Abramakabra" (1972).

In 1975, Hallervorden made his final breakthrough with the slapstick comedy show "Nonstop Nonsens" that aired until 1980 and garnered a cult following. Today, countless sketches of the show are considered as classic comedy performances. Furthermore, Hallervorden published a number of songs; first and foremost joke versions of popular songs like "Die Wanne ist voll" (with his regular show partner Helga Feddersen) or "Punker Maria".

In 1985/86, Hallervorden returned to the TV screen with the TV series "Die Nervensäge" and with his "Didi-Show". However, he was not able to tie on his success on the movie screen.

In the early 1990s, Hallervorden returned to political satire, for instance, with his shows "Spottschau" (in 1992 on Sat.1) or "Hallervordens Spott-Light" (from 1994 to 2003 on ARD). From 1996 to 1997, he temporarily hosted the Saturday evening show "Verstehen Sie Spaß?" and from 2005 to 2010, he was a member of the team of "Comedy-Falle" on Sat.1. Furthermore, he regularly toured Germany with his solo programs. In 2005, he published his autobiography "Wer immer schmunzelnd sich bemüht" on the occasion of his 70th birthday. In 2008, Hallervorden took over Berlin's Schlossparktheater and re-opened it for theatre performances in September 2009.

In these years, Hallervorden was rarely seen on the movie screen: He, for instance, appeared in small roles in the comedy "1 1/2 Ritter – Auf der Suche nach der hinreißenden Herzelinde" ("1½ Knights - In Search of the Ravishing Princess Herzelinde", 2009) or in the thriller "Armee der Stille" ("La Isla Bonita", 2009).

Then he had three memorable screen roles over the course of 2012 and 2013: He played a wealthy child molester and murderer in "Das Kind" ("The Child"), portrayed a nobleman in the period piece "Das Mädchen und der Tod" ("The Girl and Death") and starred as pensioner and former Olympic runner who wants to compete in one more marathon in the drama "Sein letztes Rennen" ("Back On Track"). For his impressive performance in this film Hallervorden won the prize as Best Actor at Deutscher Filmpreis.

In Wolfgang Murnberger's TV drama "Die Spätzünder 2 - Der Himmel soll warten" (AT/DE 2013), he delivered an impressive performance as a former chef who helps his room mate in the retirement home to recover. After featuring in a guest role as a weekend camper in the crime series "Soko 5133", Hallervorden starred again in a much noticed role: In Til Schweiger's tragicomedy "Honig im Kopf" (2014) he impressed critics and the public alike, playing a grandfather suffering from dementia who is "abducted" and taken on a last trip to Venice by his eleven-year-old granddaughter. For this role (an his lifetime achiements) he was awarded the Ernst-Lubitsch-Preis in 2014.

Director Marcus O. Rosenmüller had him play a memorable bit part in the crime drama "Tiefe Wunden" (2015, TV) as a aging rocker turning a nursing home upside down. He embodied another spry senior citizen in the German-Jewish family story "Chuzpe - Klops braucht der Mensch!" (2015, TV) as a Holocaust survivor leaving Australia after six decades to live with his daughter in Berlin.

In the social comedy "Ostfriesisch für Anfänger" (2016) Hallervorden starred as a grumpy East Frisian man who is forced to teach German to a group of refugees. The youth film "Rock My Heart" (2017) features him as a grandfatherly horse trainer who prepares a cardiac girl for a difficult horse show.

Hallervorden also made an appearance again on the theatre stage: at the end of 2017, he played the leading role of the servant in the Commedia dell'arte comedy "Mosca and Volpone" at Berlin's Schlosspark Theater. The following year his translation of Francis Veber's play "Casimir and Caucasus" premiered there. Hallervorden also has been lending his voice to characters in animated films: For example, to the vampire Vlad in the German versions of the three "Hotel Transylvania" films (US 2012, 2015, 2018), the bassett Pops in "The Secret Life of Pets" (US 2016) and "The Secret Life of Pets 2" (US 2019), and the magician Merlin in the dubbing of the German-French series "Arthur und die Freunde der Tafelrunde" ("Arthur and the Children of the Round Table", 2019). In "Der kleine Rabe Socke - Suche nach dem verlorenen Schatz" ("Raven the Little Rascal - Hunt for the Lost Treasure", 2019) he was the voice of the grandpa badger.

On television, Hallervorden appeared in the comedy "Liebe auf den ersten Trick" (2018) as a lottery millionaire who gets caught between the fronts of two competing cheats. In the crime thriller "Sievers und die Tote im Strandkorb" (2019), from the series "Nord Nord Mord", he played an agile senior who frees his best friend from custody. Marco Petry cast him in the comedy "Mein Freund das Ekel" (2019) as a misanthropic pensioner bound to a wheelchair, who is reformed by a new carer (Alwara Höfels). Also in 2019 the children's film "Benjamin Blümchen" ("Benjamin the Elephant") was released in cinemas, with Hallervorden as an odd ex-secret agent.

Dieter Hallervorden lives alternating in Berlin and in Trégastel, Northern France, where he owns a castle.