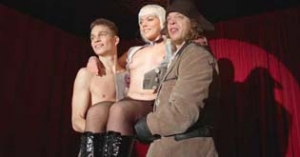 Bastian, a 20-year old concrete worker apprentice from Wismar, commits a murder - he nearly randomly kills a homeless person. Nobody would get on to Bastian′s track, particularly as the police is considering an accident as the cause of death. But then, one of Bastian′s friends, the only witness of the murder, tries to blackmail him. Thus, Bastian flees Wismar and rather by accident joins a group of journeymen. But their travels more and more get to the young murderer′s guilty conscience.