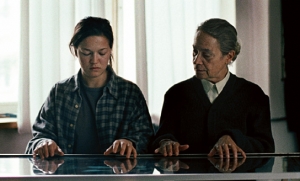 Pianist Traute Krüger has been giving piano lessons in a women′s prison for more than 60 years, almost as if she had to pay for some crime herself. One day she meets Jenny there, an unapproachable, erratic, violent young woman who is imprisoned for murder. Traude at first refuses to take on the fiercely rebellious girl as a pupil – until she hears her play. As a child Jenny was a musical prodigy and now could easily take part in piano competitions outside of the prison if she could only pull herself together. A battle of wills develops between the self-destructive inmate and her strict, conservative teacher – a duel of life and love that rubs salt in the hidden wounds of the two women. In a frenzied finale, Jenny has only four minutes to do something that not even Traute could expect of her.

Chris Kraus cast the two dissimilar women with the experienced actress Monica Bleibtreu as Traude and the previously almost unknown Hannah Herzsprung, who as Jenny delivers an exhilarating, universally lauded performance in her first leading role. The film′s music, which features alongside compositions by Mozart, Schumann, Beethoven and Schubert a brilliant piece by contemporary composer Annette Focks, stands in a contrapuntal relationship to the clash of the two women. Chris Kraus: "For me the music in "Four Minutes" is a dominant element, not as an end in itself, but as an alternative to the gruesome world that shines through behind the two women."