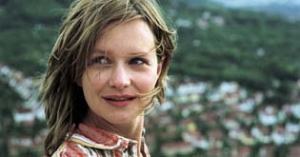 "Jena Paradies" tells the enthralling story of the relationship between a young, single-mother and her dreamy, seven-year-old son.

25-year-old Jeanette Bauch lives alone with her son Louis. But their life is not idyllic: her duties as a mother and her work take up so much of her time, that she sometimes feels like she has been robbed of a life of her own.
One day she meets Philipp, who is just moving into the same building with his wife and daughter. Jeanette throws herself into a wild affair with Philipp. More and more, she neglects Louis, who then starts to go about his own way. When Philipp decides to go back to his family, Jeanette is destroyed.
"Jena Paradies" portraits the desires and problems of a young East German woman, who has to learn to come to terms with her life as a single-mom.