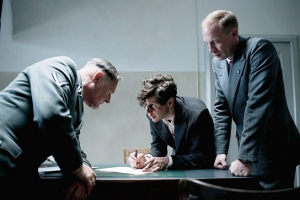 Munich, November 8, 1939. Adolf Hitler is making a jubilee speech at the Bürgerbräukeller. Meanwhile, a man is arrested at the boarder to Switzerland because of suspicious objects in his luggage. Only minutes later, a bomb goes off right behind the speaker's desk in the Bürgerbräukeller – but Hitler has already left the place. The arrested man turns out to be German carpenter Georg Elser, who soon is suspected to be responsible for the assassination attempt. For days, he's interrogated and tortured by Nazi head of police Arthur Nebe and head of Gestapo Heinrich Müller. Elser eventually confesses, yet he also sticks to his convictions and insists that he acted all alone in order to protect, friends, family and his lover Elsa. Elser is deported the Sachsenhausen, and later the Dachau concentration camp. In April 1945, only days before the end of the war, he is murdered on Hitler's order by the SS.