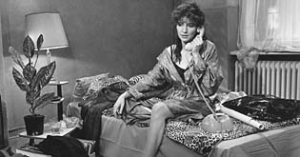 After breaking up with her boyfriend who proposed to her, Gina moves out and is on the lookout for a new house. While looking for it she meets Harry, an English drummer who is also looking for a new place after his wife kicked him out. To fool the landlord into renting her his house, she pretends Harry is her husband. Her plan works out to the point that now Harry convinces her to let him live there as well and she is not very happy with this outcome. As it turns out, Harry is a pyromaniac and sets his room on fire a few times, but manages to keep it under control. After many attempts to remove Harry from their house, he finally moves out and Gina realizes how much she actually liked him. This is when she sets fire to the bed. Luckily, Harry is just on his way to pick up his last items when he sees the fire and helps her put it out, marking the start of their relationship.