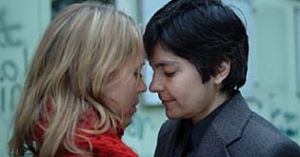 The Iranian translator Fariba, threatened with the death sentence in her native country because of her love affair with a woman, manages to flee to Germany. Applying for asylum, she claims to be politically persecuted, but lies about the real reason for her persecution. Her application is turned down. The suicide of the unbalanced Iranian refugee Siamak Mustafai offers her a dramatic solution to her desperate situation – she cuts off her hair, disguises herself as a man and takes on his identity. With a temporary residence permit in his name she arrives in a small southern German town. At first it appears that her survival is assured there, but she has to keep up her male disguise even in the refugee home – the smallest mistake could blow her cover.

Fariba works illegally in a sauerkraut factory in order to earn enough money to buy forged papers. There she meets Anne, who takes a great interest in "Siamak′s" well-being and is strangely attracted to this unusual foreigner. As they spend more and more time together, they come ever closer and Anne begins to suspect Fariba’s true identity…

In "Unveiled" Angelina Maccarone tells of persecution, the search for one’s identity and the inner exile her protagonist experiences in Iran as well as in Germany because of her sexual orientation.