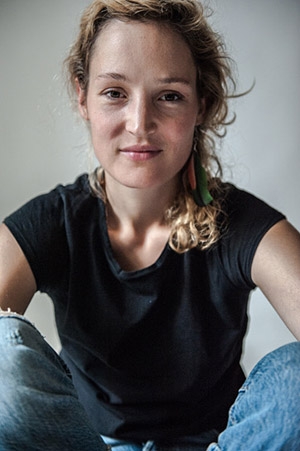 Vicky Krieps, born in Luxembourg on 4th of October, 1983, started acting while studying at the Conservatoire de Luxembourg. She then went on to study acting at the Zürcher Hochschule der Künste from 2005 to 2009. During that time she made her first appearances in short films and on stage, e.g. playing the lead role in "Die rote Zora und ihre Bande" (2009) at the Schauspielhaus Zürich. In 2010, she directed the play "Darwins Erbe" at the Junges Staatstheater Berlin. Her first bigger role in a feature film was in Andres Veiel's "Wer wenn nicht wir" ("If Not Us, Who", 2011) as a friend of RAF terrorist Gudrun Ensslin. Also in 2011, she starred in the spy thriller "Hanna" ("Wer ist Hanna?"), playing a supporting role as the main character's murdered mother. After appearing in a prominent role in the episode "Eine bessere Welt" (Director: Lars Kraume) of the German crime series "Tatort", she played a holidaymaker who, after flirting with a married man, disappears without a trace in Ann-Kristin Wecker's relationship drama "Formentera" (2012).

In Detlev Buck's period drama "Die Vermessung der Welt" ("Measuring the World"), she made an appearance as the wife of mathematician Carl Friedrich Gauß and played a Comtesse alongside Ulrich Tukur in Niki Stein's "Rommel" (2012, TV). Together with Liv Ullmann und Juliane Köhler, she was part of the ensemble of "Zwei Leben" ("Two Lives", 2012). Vicky Krieps has also been working for French productions on a regular basis, e.g. in a supporting role in the love story "Une histoire d'amour" (2013), in the thriller "Möbius" ("Die Möbius-Affäre", 2013), the relationship drama "Avant l'hiver" ("Bevor der Winter kommt", 2013) and in the police thriller "La confrérie des larmes" (2013). In the John le Carré adaptation "A Most Wanted Man" (2014), she played a team member of a counter-terrorism official portayed by Philip Seymour Hoffman. She had title roles in the TV drama "Alleinflug – Elly Beinhorn” set in WWII about a pilot turned media star and in Matti Geschonneck's "Das Zeugenhaus" (2014, TV), portraying another real-life character from WWII, Marie-Claude Vaillant-Couturier, a member of the resistance, who was the first woman to make a statement at the trials in Nuremberg in 1946.

Krieps played her first lead role in a feature film in "Das Zimmermädchen Lynn" ("The Chambermaid Lynn", 2014), as a lonely young woman who develops a strange ritual in order to feel close to others. For her performance she received a Young Talent Award at the Munich IFF. After starring in lead roles in the French-German TV productions "Tag der Wahrheit" and "Das gespaltene Dorf" (both 2015), she won awards at several international film festivals, among them Santiago (Chile) and Jaipur (India), for her performance in the short film "Pitter Patter Goes My Heart" (DE/US/AT 2015).

She portrayed important characters in the thriller "Colonia Dignidad – Es gibt kein Zurück" ("Colonia", DE/LU/FR 2015) and in the satire film "Outside the Box" (DE/IT 2015). In the Austrian parental satire "Was hat uns bloß so ruiniert" ("We Used to Be Cool", 2016), she played the lead role as a young mother. A year later, she starred in another lead role as Jenny Marx in the biopic "Der junge Karl Marx" ("The Young Karl Marx", FR/BE/DE 2017). Widely acclaimed was her portrayal of a young servant, who becomes the muse and wife of a charming yet neurotic fashion guru (Daniel Day-Lewis) in P. T. Anderson's "Phantom Thread" ("Der seidene Faden", US/GB 2017) for which she received a number of American critic's awards. Another unusual love story was at the heart of "Gutland" (LU/DE/BE 2017), where a criminal on the run falls for a mysterious young woman (Krieps). The film was shown at a number of festivals and was released in German theaters in spring 2018.

In the same year, she was seen in the international Stieg Larsson film adaptation "The Girl in the Spider's Web" as the editor-in-chief of Millenium and in the series "Das Boot" in a leading role as an interpreter. For the latter, she won the German Television Award as well as two awards at the Festival international de Télévision in Monte-Carlo. Krieps remained a sought-after actress in international productions over the next few years: She had leading roles in the World War II drama "The Last Vermeer" (US 2019) and in "De nos frères blessés" ("Faithful", FR/BE/DZ 2020), set during the Algerian War.

In 2021 Krieps was part of the ensemble of actor Daniel Brühl's directorial debut "Nebenan" ("Next Door"), which premiered in competition at the Berlinale. She then stood in front of the camera as Empress Sisi for Marie Kreutzer's historical film "Corsage" (AT/LU/DE/FR, start: 2022).