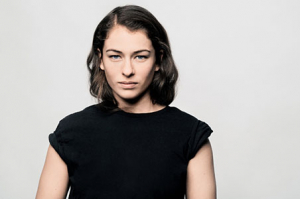 Henriette Confurius, born February 5, 1991 in Berlin, made her acting debut as a ten-year-old with a minor role in the TV comedy "Die Meute der Erben" (2001). Shortly afterwards, she had already attained her first lead in Anne Wild's theatrical feature "Mein erstes Wunder" ("My First Miracle", 2003) where she stars as an orphan who develops an unusual friendship with a man in his forties. In the episode "Verloren" of the crime series "Polizeiruf 110" (2003) she personified the daughter of a married couple who have lost their love and are dominated by routine whereas in the "Bella Block" episode "Das Gegenteil von Liebe" (2004) she convincingly portrayed a girl who escapes from her day to day problems to a dream world. For her performance in these films, Confurius was awarded the sponsorship award of the Deutscher Fernsehpreis (German Television Award) 2004.

The following years, she featured in several television dramas like "Der Novembermann" (2007) alongside Götz George and "Das Geheimnis im Wald" (2008) with Pierre Besson and Christoph Waltz, as well in series like "Ein Fall für zwei", and in several "Tatort" episodes. In the first part of the tripartite made-for-TV film "Die Wölfe" (2009), Confurius starred as a member of a teenage street gang during the time of the Berlin Blockade in 1948/49. Like the rest of the film's young cast she was awarded the Deutscher Fernsehpreis sponsorship award, in her case for the second time.

In Friedemann Fromm's TV drama "Jenseits der Mauer" (2009) she played the daughter of GDR fugitives who, as an infant, had been given up for adoption by force; in the award-winning docudrama "Eichmanns Ende" (TV, 2010) she portrayed the daughter of Holocaust survivor Lothar Hermann. Lighter topics dominated the comedy "Familie Fröhlich - Schlimmer geht immer" (TV, 2010) and the Brothers Grimm adaptation "Allerleirauh" (TV, 2012) starring Confurius as princess Lotte.

On the big screen Henriette Confurius' appearances became increasingly rare. She had a bit part in Julie Delpy's historical drama "Die Gräfin" ("The Countess", D/F/USA 2009) and a larger one in "Der ganz große Traum" ("Lessons of a Dream", 2011) as a domestic worker with whom the juvenile son of an entrepreneur falls in love.

Confurius then starred in "Die geliebten Schwestern" ("Beloved Sisters"), an entry in the competition of the Berlin IFF 2014. Directed by Dominik Graf, she portrayed one of two penniless aristocratic sisters who enter a ménage à trois with the rebellious poet Friedrich Schiller.

In Peter Keglevic's TV-Drama "Die Fremde und das Dorf" (AT 2014) she took on the role of an Italian teacher, that gets treated like an unwanted outsider in an Austrian village. In 2015 Confurius took part in the six part epic "Tannbach – Schicksal eines Dorfes" ("Line of Separation"), in which she played the daughter of a German count that marries a communist.

In the elaborate fairytale-remake "Das kalte Herz" ("Heart of Stone", 2016) she played young charcoal burner Peter Munks lover. In the TV-fairytale "Rübezahls Schatz" (2017) she played the maidservant Rosa. In 2018 she reprised her role of the count's daughter, Anna, in the second season of Tannbach.

A year later, Sophie Kluge's "Golden Twenties" celebrated its world premiere at the Munich Film Festival. In the director's feature debut, Confurius played the leading role of a frustrated and disoriented woman in her mid-twenties, who gets a new perspective on life through an internship at the theater and her budding love for an actor.

In Stefan Ruzowitzky's adaptation of "Narziss und Goldmund" ("Narcissus and Goldmund"), which was theatrically released in March 2020, she played the great love of the title character, Goldmund. Shortly before that, public broadcaster ZDF aired the six-part mini-series "Die verlorene Tochter", which had already been filmed in 2018, and in which Confurius starred as a woman believed dead who reappears one day with no memory.

She had another central role in a series in the Netflix production "Tribes of Europe", in which she played one of three siblings who, after finding a mysterious cube in post-apocalyptic Europe, have to fight off the attacks of several peoples at war with each other.