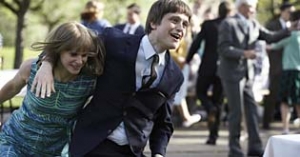 If Not Us, Who

West Germany in the early 1960s. The country is quiet – for the time being. Bernward Vesper takes up his studies in Tübingen where he is attending Walter Jens’ seminar on rhetoric. Bernward wants to be a writer and spends his nights bashing the keys of a typewriter. At the same time he is keen to defend his father, the poet Will Vesper who was celebrated by the Nazis as a proponent of their ‘Blood and Soil’ ideology. The land where Bernward lives is being suffocated by its past. The war has only been over for fifteen years, old Nazis are back in positions of power, and nobody is prepared to talk about war crimes; the Republic is standing to attention.

One day Bernward meets Gudrun Ensslin and her friend Dörte. Before long, the three friends are living together in a ménage à trois. But their three-way relationship doesn’t last long. It soon transpires that Gudrun and Bernward are twin souls. This marks the beginning of an extreme relationship that is unquestioning and excessive, a love story that goes beyond the threshold of pain.

Setting out together to conquer the world, the pair arrives in West Berlin in 1964 where they become part of the left-wing bo-ho set. When the Social Democratic Party agrees to form a grand coalition with the Christian Democratic Union, Bernward and Gudrun are not the only ones who decide to join the Extraparliamentary Opposition movement. Gudrun and Bernward become part of a social and political upheaval that soon takes hold around the globe: liberation movements, student protests and the Black Panther movement in the USA; drugs and rock ‘n’ roll. The course of history is inexorable but, at the time, for a moment, it looks as if it might be possible to change its path. If not us, who? And when, if not now? And then another man, Andreas Baader, appears on the scene. Here is someone who is more unswerving, more radical and resolved than Bernward. Before long, Andreas, Gudrun and Bernward find themselves caught up in the centrifugal forces of history – and they cannot control them.