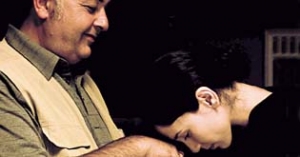 "Stop dreaming!" says the mother to her twenty-five-year-old daughter Umay when she and her young son Cem appear at the door of her parents’ Berlin apartment. Umay has run away from an unhappy marriage in Istanbul and has returned to Berlin because she wants to lead her own life again. She knows that she’s expecting a lot from her parents and siblings but she hopes that their loving relationship will mean more to them than the pressure of social conventions.

But before long she realises that her family cannot simply ignore their deep-seated traditions and the situation could well break them. When the family decides to restore the family's reputation by returning Cem to his father, Umay once again begs for their help – but ends up breaking with them for good. Umay falls in love with Stipe and she and Cem begin a new life. Umay tries mend the relationship with her family, but doesn't realise that it's too late for reconciliation.

Feo Aladag: "Many German citizens of Turkish descent are – understandably – at odds with their identity. In Germany they feel Turkish and unwanted, and in Turkey they feel like Germans. Even in this section of society adultery is an exception – the worst catastrophe. In my opinion, one of the reasons for the current return to traditional values, particularly within a younger genera - tion, is social exclusion by the majority society. "Die Fremde" is not meant to be a representative portrait of a social group, nor is it a manual for life. Rather, the film seeks to bring to light one possibility, which, in this story, contains the real sense of hope."