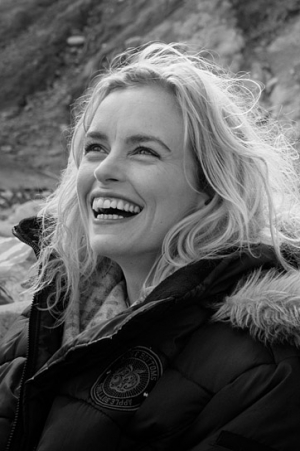 Nina Hoss, born July 7, 1975 in Stuttgart, as the daughter of Heidemarie Rohwedder (artistic director of Württembergische Landesbühne) and Willi Hoss (chairman of the works council at Daimler-Benz), started her career at the age of seven as a voice in radio plays and made her stage debut at the age of 14. From 1995 to 1998, she attended drama school at Hochschule Ernst Busch in Berlin and became a cast member of Deutsches Theater, also in Berlin. Hoss made her movie debut in 1996 in Joseph Vilsmaier's "Und keiner weint mir nach" ("And Nobody Weeps For Me"). In the same year, she made her breakthrough performance in the title role of "Das Mädchen Rosemarie" ("A Girl Called Rosemarie"), Bernd Eichinger's TV remake of the classic German movie from the 1950s. Her portrayal of the high-class call girl Rosemarie Nitribitt, who was murdered in 1957 in Frankfurt, won Hoss the Goldene Kamera award as best new actress. But besides her film work, Nina Hoss continued to perform on stage during the following years.

In 2001, Nina Hoss started to work with director Christian Petzold and subsequently became his favourite actress. In the TV movie "Toter Mann" ("Something to Remind Me"), Hoss played the mysterious Leyla who starts a romantic affair with a lawyer but hides her true motives. In Petzold's next film, "Wolfsburg" (2003), Hoss was seen as Laura, a woman who unknowingly falls in love with the man who had run down her son in a hit-and-run accident. Hoss won the Grimme award for both parts in 2003, and 2005 respectively. Furthermore, Hoss also won the Bavarian film award for her performance in the leading role as a tourist who falls in love with a Kenyan Massai warrior in Hermine Huntgeburth's successful drama "Die weiße Massai" ("The White Massai", 2005).

In "Yella", her third film with Christian Petzold, Hoss plays a woman from a small town in East Germany who wants to start a new life in West Germany but cannot really leave her old life behind. Her performance as Yella won Hoss the Silver Bear as best actress at the 2007 Berlinale film festival and the German Film Award in 2008. in 2007, Hoss also won one of the most important German theatre awards, the Gertrud Eysoldt ring, for her performance as "Medea" in the production of Deutsches Theater Berlin.

Besides "Yella", two other films in 2007 featured Hoss in the lead role, "Das Herz ist ein dunkler Wald" ("The Heart is a Dark Forrest") by Nicolette Krebitz, and "Hannah" by Erica von Moeller. In October 2008, her next feature film was published, "Anonyma - eine Frau in Berlin"; the fourth project together with director Christian Petzold, "Jerichow" started in January 2009.

At the End of 2010 Nina Hoss played a leader of female vampires in Berlin in "Wir sind die Nacht" ("We Are the Night") by director Dennis Gansel. In February 2011 Nina Hoss was invited to the jury of the competition at the International Filmfestival of Berlin. The following year, her next collaboration with Petzold premiered at the festival: "Barbara", the story of a doctor that wants to leave the German Democratic Republic, was a major success with critics and audiences alike. In 2013, "Gold" by director Thomas Arslan premiered - a Western with Nina Hoss in the main role.

In the 2013/2014 season, Hoss moved from the Deutsches Theater Berlin, where she was engaged for 15 years, to the Berlin Schaubühne. In 2013 she also received the Federal Cross of Merit on ribbon.

After playing an utterly cool and restrained member of a German counter-terrorist unit in Anton Corbijns thriller "A Most Wanted Man" (2014), Hoss continued her creative collaboration with Christian Petzold in "Phoenix" (2014), in which she portrays a Jewish woman who is liberated from a Nazi concentration camp at the end of WWII. Deeply scarred, she returns home, only to meet the husband who betrayed her to the Nazis – and who know mistakes her for a doppelganger of his wife, whom he believes to be dead.

For this role she was nominated for the German Film Award and in the USA for the National Society of Film Critics Award.

In 2014 she recorded the song "Europa geht durch mich" with the British band Manic Street Preachers; with the band she also performed at the Glastonbury Festival, one of the world's largest open-air music festivals. At the Berlin Schaubühne she could be seen in "Die kleinen Füchse" (2014), "Bella Figura" (2015) and "Rückkehr nach Reims" (2017), among others.

Hoss took on a rare television role from 2014 to 2017 in the US spy series "Homeland", as a German secret service employee. In 2017 she played a leading role alongside Stellan Skarsgård in Volker Schlöndorff's English-language feature film "Rückkehr nach Montauk" ("Return to Montauk", DE/FR/IR).

In 2019 Nina Hoss received an invitation to become a member of the Academy of Motion Picture Arts and Sciences in Los Angeles. In the same year, she was awarded the Douglas Sirk Prize at the Filmfest Hamburg for her services to film culture and the film industry.

Her leading role as an obsessive music teacher in "Das Vorspiel" ("The Audition", 2019) earned her the Best Actress award at the San Sebastián International Film Festival (Spain) and at the Stockholm Film Festival (Sweden). In January 2020 the film was released in German cinemas. Just three months later, in April 2020, the next film with Nina Hoss will be released in the cinemas: "Pelikanblut" ("Pelican Blood", DE/BG 2019), a psychodrama about a mother who wants to heal her adopted daughter who has pathological behavioral problems by means of a radical "therapy".