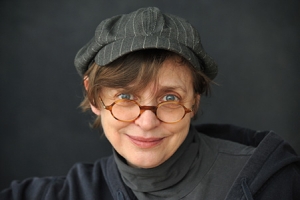 Katharina Thalbach, born January 19, 1954, in Berlin, is the daughter of an actress and a director. She made her TV debut already at the age of four and starred in several children's parts. From 1969 on, Thalbach performed at Berliner Ensemble and from 1972 on at Volksbühne Berlin. During the mid-1970s, Thalbach starred in two films by Egon Günther. In the role of Ottilie, she outplayed leading actress Lilli Palmer in "Lotte in Weimar" and starred in her first leading role as Lotte in "Die Leiden des jungen Werther" ("The Sorrows of Young Werther") in 1976. Thalbach also left East Germany in that year and went to West Berlin together with Thomas Brasch.

Besides her success at the theatre, Thalbach became known for her innocent, yet sexy and experienced air in several important films: In Margarethe von Trotta's "Das zweite Erwachen der Christa Klages" ("The Second Awakening of Christa Klages"), Thalbach played a bank accountant who pursues a bank robber on her own account. She also starred as little Oskar's young stepmother and lover Maria in Volker Schlöndorff's "Die Blechtrommel" ("The Tin Drum"). Thalbach played her most important parts in films by Thomas Brasch. In Brasch's debut film "Engel aus Eisen" ("Angels of Iron"), Thalbach starred in the leading part of Lisa Gabler who was a member of the – authentic – Gladow gang that utilised the unstable conditions in the early post war years for a series of robberies in the politically divided Berlin.

The following year turned out to be equally busy for the actress, who appeared in the fantasy epic "Rubinrot" ("Ruby Red"), the satire "Der Minister" and the comedy "Hai-Alarm am Müggelsee", and also returned for "Hanni & Nanni 3".

Continuing her success with child-friendly family fare, Thalbach had starring roles in "Rico, Oskar und die Tieferschatten" ("The Pasta Detectives"), the fantasy film "Saphirblau" ("Sapphire Blue") and in Til Schweiger's box office success "Honig im Kopf". Thalbach next shone in the role of an employee of a bankrupt drugstore chain who teams up with her colleagues to take their corrupt boss hostage in Uwe Janson's "Die Schlikkerfrauen" (2014). In 2015, she reprised her role of the mischievous Ellie Wandbek for "Rico, Oskar und das Herzgebreche" ("The Pasta Detectives 2") and played a supporting role "Ich bin dann mal weg", the screen adaptation of Hape Kerkeling's eponymous bestselling novel.

In "Bibi & Tina 3: Mädchen gegen Jungs" (2016), she played the likable chef of a camp, and in the fantasy film "Smaragdgrün" ("Emerald Green", 2016), she again starred as the kind-hearted great aunt Maddy. On TV she appeared in leading roles in the crime caper "Wir sind die Rosinskis" (2016) as well as in the much-acclaimed comedy "Zwei Bauern und kein Land" (2017).

On the big screen, Thalbach continued to appear in prominent supporting roles: as a teacher in "Hanni & Nanni: Mehr als beste Freunde" (2017), a neighbor in the love story "Wuff - Folge dem Hund" ("Woof – Follow the Dog", 2018) and as grandmother in the societal comedy film "100 Dinge" (2018). In Yilmaz Arslan's coming-of-age drama "Sandstern" (2018), she starred as the grandmotherly neighbour of a 12-year-old Turkish boy, who only recently moved to Germany. She then played the headmistress in the children's film "Alfons Zitterbacke - Das Chaos ist zurück" ("Alfons Zitterbacke - The Return of the Chaos", 2019). Philipp Stölzl cast her in a leading role in the musical "Ich war noch niemals in New York" (2019) as a woman with amnesia leaving for America.

Also in 2019, the French Ministry of Culture awarded her the Ordre des Arts et des Lettres, an award to "persons who have distinguished themselves through their work in the artistic or literary field or through their contribution to the influence of the arts and literature in France and throughout the world".