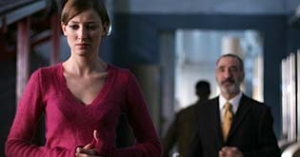 Bucharest may still be the Paris of the East, but it is now a sepia-toned metropolis, aching with nostalgia for its grand boulevards and proud architecture, for its cosmopolitan graces and humanity - all violated by a long reign of fear and repression. It is here that the story of Felix, Brindusa and Nicu unfolds. Nicu Iorga, the middle-aged entrepreneur and uncontested lord of his fiefdom, a large printer′s shop... Felix, a young German engineer who has come to install a new offset machine in Nicu′s shop... Brindusa, Nicu′s translator, secretary and former mistress, who falls in love with Felix... The young German wants to marry Brindusa and take her back to Germany with him. It could be so simple if it weren′t for Nicu, who simmers with an explosive mixture of rage and envy towards his country, the West, and, above all, Felix...

A tale of misunderstandings - linguistic, cultural, emotional - that reflect the fears and prejudices of individuals from different nations as they tentatively come together.