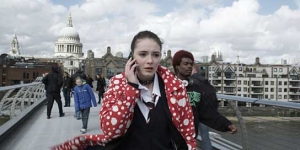 The first novel in Kerstin Gier's best-selling trilogy for teens and young adults, Rubinrot ("Ruby Red") is the story of 16-year-old Gwendolyn who, thanks to a familial genetic mutation, can travel through time. Until her chance discovery, everybody else believed her cousin Charlotte was the one with the gift, but when Gwendolyn travels back in time and takes Charlotte's place in the secret organization that oversees time travel, she unleashes not only jealousy but also a family power struggle. After all, it was Charlotte who was being groomed and trained for 'stardom'. If this wasn't enough, there is also the good-looking Gideon who is making her head spin, as well as a mysterious group with a secret they are prepared to guard at any price. And who exactly is that girl in the past that looks exactly like her?