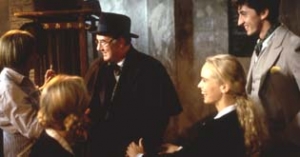 The screen version of Klaus Mann′s Mephisto brought Klaus Maria Brandauer international recognition and its director an Academy Award for Best Foreign Film. Set in the Paris émigré community during the Nazi era, Der Vulkan is the story of two German sisters. One is devastated by her life in exile and the loss of the man she loves. The other draws strength from her situation, and finally sets off for the New World. It is the story of a lost generation of idealists who refuse to bow before an inhuman dictator and prefer a life of hardship instead.