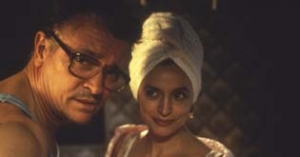 A "mufta" is a multifunctional table, a "Minetta" is a radio, mopeds are called "Swallows" and "Asthmakraut Halle" (a special asthma medication) is the only recreational drug available. The Soviet Union is big brother; the rest of the world is the enemy of the people, and the Berlin Wall is actually a bulwark againt fascists. This is the German Democratic Republic, the land where Michael lives. He wears bell-bottoms and a home-printed Rock & Pop T-shirt. And the street he lives on wends most of its length through West-Berlin, with just its tail in the East. The apartment is cramped; the neighbour works for the secret police; there′s an uncle from the West to smuggle in pantyhose; and a West German passport which causes his mother to age before his very eyes. But Micha is focused on his goal: doing whatever it takes to win the heart of the prettiest girl at school. It all happened a very long time ago, but if Micha doesn′t tell the story now, we′ll never know what it was like, back then in the seventies, in the shadow of the Berlin Wall, at the back end of the Sun Alley.

In Sun Alley director Leander Haussmann and screenwriter Thomas Brussig take us on a trip through East Germany. This is no feature-length grouse: it′s a heartfelt and sympathetic look - the re-discovery of a world that has long since ceased to exist.