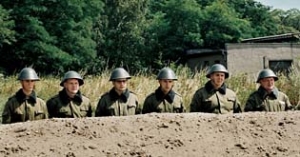 The young GDR citizen Henrik Heidler has to do his military service in the NVA, the "Nationale Volksarmee" - one and a half years in uniform, which he wants to survive unscathed. During his military service he becomes friends with the rebellious Krüger, who doesn’t want to submit to the strict hierarchy. Together they try to trick their way out of the horrible staleness of army service. They laugh at military service and use "International Women’s Day" to flirt with the handsome "comrades".

But the unsympathetic Colonel Kalt has got his eyes on Krüger. With nasty tricks he tries to turn the rebellious recruit into a "proper" soldier. That is, until Henrik, who up till now has always tried to keep his head down, realizes that for his oppressed friend he has to take sides.