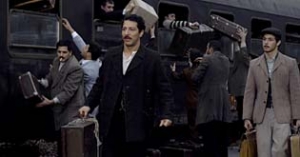 On 10 September, 1964, Germany’s one-millionth "guest worker" was welcomed. Spanning a period of no less than forty-five years, this film by sisters Yasemin Samdereli (director) and Nesrin Samdereli (screenplay) tells the story of guest worker number one-million-and-one – a man named Hüseyin Yilmaz and his family. "Who or what am I – German or Turk?" asks six-year-old Cenk Yilmaz when neither his Turkish nor his German schoolmates pick him for their respective football teams.

In an attempt to comfort Cenk, his 22-year-old cousin Canan tells him the story of their grandfather Hüseyin, who came to Germany at the end of the sixties as a "guest worker" and who later brought his wife and children to "Almanya". Germany had long since become the family’s home when without warning one night, Hüseyin surprises his loved ones with the news that he has bought a house in Turkey and now wants to return to the old country. Refusing to brook the slightest opposition, the entire family set off for Turkey. This marks the beginning of a journey full of memories, arguments and reconciliations – until, that is, the family trip takes an unexpected turn…

The young filmmakers have plundered their own memories of childhood and youth for this, their cinematic debut. Yasemin Samdereli: "Even at an early age, we were always struck by the way people found it amusing whenever we told them stories about our childhood: that Nesrin for instance once played German carnival figure ‘Funkenmariechen’ and used to belt out Catholic hymns fervently during mass. Or that I used to play the flute in a marching band and wrote my name Jasmin – until my second grade teacher torpedoed my attempts to hoodwink her."