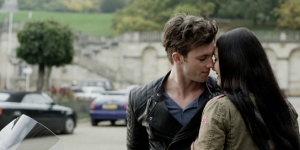 Young people as they are, Gwendolyn knows that when Gideon starts behaving really weirdly, as boys do, there is a bad dose of the hormones coming on! Which means one of them, which will be Gwendolyn, has to keep hers well under control. Fortunately for her, and the world, she has some pretty good advisers on her side, such as her best friend Leslie, the little gargoyle Xemerius, the school ghost James and her grandfather who, now in his younger years, is able to give her important tips from the past.

But when our two young and intrepid adventurers join forces to oppose a threatening alliance of evil and end up trapped in the clutches of the evil Count of St. Germain it results in a struggle that not only pits good against a whole load of evil but will put their love to the toughest of tests. With the fate of the world as everybody knows it resting on their shoulders and then some serious dancing lessons to be mastered, there is all to play for.