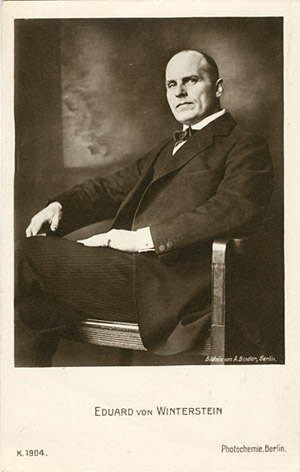 Eduard von Winterstein, whose birth name was Eduard Clemens Franz Freiherr von Wangenheim, was born in Vienna, Austria, on August 1, 1871. His father, Baron Hugo von Wangenheim, was an officer and landowner, his mother Luise Dub was an stage actress at the Vienna Burgtheater, among others. Through her, he came into contact with the world of theater and acting at a very early age.

After his parents divorced, Eduard stayed with his mother. As he later recounted in his memoirs, the two initially led a "nomadic life." Eventually, they moved to Gotha in Thuringia to live with Eduard's uncle Gustav von Wangenheim, who soon became a second father to the boy.

At the age of 16, Winterstein left the Gymnasium to prepare himself for his exams, which he took in Weimar. He then began to pursue his career goal of becoming an actor. He received acting lessons from his mother (as did his sister Clementine), and in 1899 the siblings were hired at the Fürstliches Theater in Gera, where their mother also worked. There Winterstein met Theodor Lobe, among others, whom he later called an "undeservedly forgotten man."

He then appeared on stage in smaller roles in Hof, Stralsund, Gelsenkirchen and Göttingen, among other places. An important milestone in his career was Annaberg-Buchholz in the Erzgebirge, where he played the title role in Goethe's "Egmont" at the opening of the town theater in April 1893. Winterstein became 'first hero and lover' at the theater and appeared in high-profile plays such as "Hamlet." In his memoirs he wrote that he considered this theater to be the place where he felt reborn and truly became an actor. Here Winterstein also met his first wife, the actress Minna Mengers. The two got married in 1894, but the marriage did not last long. Their son Gustav von Wangenheim (*1895, named after his paternal uncle) also became an actor.

After other stops, Winterstein received a three-year contract at the Berlin Schiller Theater in 1895, where he came to fame as Major von Tellheim in the Lessing comedy "Minna von Barnhelm". The role of Minna was played by Hedwig Pauly, who became his second wife in 1899. In 1898 Winterstein joined the Deutsches Theater in Berlin. However, since he was mainly an understudy there, he moved on to the Lessingtheater. After appearing on stage at Max Reinhardt's Kleines Theater in the highly successful production of Gorky's "The Lower Depths", he followed Reinhardt in 1904, first to the Neues Theater am Schiffbauerdamm, then back to the Deutsches Theater. There he also directed the drama school from 1905 to 1920.

Unlike some of his stage colleagues, Winterstein was very open to the newly emerging medium of film. He made his debut in front of the camera in 1910 as a sheik in the oriental dance pantomime "Sumurun," a theatrical film of Max Reinhardt's stage production. From 1913 he took on numerous leading roles in melodramas, adventure stories and literary adaptations. He was Henny Porten's partner in, among others,"Märtyrerin der Liebe" (1915), "Die Claudi vom Geiserhof" (1917) and the two-parter "Die Faust des Riesen" (1917). He also played the leading roles in two important films by Robert Reinert: an explorer in "Opium" (1919) and a factory owner who doubts progress in the scandal-ridden postwar drama "Nerven" ("Nerves", 1919).

In Ernst Lubitsch's "Madame DuBarry" ("Passion", 1919), with Pola Negri in the title role, he appeared as Count DuBarry. Also alongside Negri, he played the Marchese de Montebello in "Das Martyrium" (1920). With Asta Nielsen he starred in "Der Reigen - Ein Werdegang" ("The Merry-Go-Round", 1920) and "Hamlet" (1921), in which Nielsen played Hamlet and Winterstein the Danish King Claudius.

By the end of the 1920s, Winterstein had appeared in a large number of productions, some of which are now among the great silent film classics. He was a caliph in Fritz Lang's "Der müde Tod" ("Destiny", 1921), Count Rudenburg in Murnau's "Der brennende Acker" ("The Burning Soil", 1922) and the Prince of Anhalt-Dessau in the historical four-parter "Fridericus Rex" (1923). He played the father of "Försterchristel" (1926) and twice impersonated General Leberecht von Blücher: in "Lützows wilde verwegene Jagd" (1927) and in "Napoleon auf St. Helena" ("Napoleon at St. Helena", 1929), with Werner Krauß in the title role.

The transition to talkies did not cause Eduard von Winterstein any problems, although he was now mostly seen in supporting roles. As before, he played mainly high-ranking military officers, aristocrats, commissioners, civil servants, professors and other authority figures. His first talkie role was as a school principal in Josef von Sternberg's classic "Der blaue Engel" ("The Blue Angel", 1930). He was a baron in the romantic drama "Trenck" (1932) and a magistrate in "Mensch ohne Namen" (1932).

During the Nazi era, Winterstein was able to seamlessly continue his stage and film career, in similar roles than before. He played a bailiff in Detlef Sierck's "Das Mädchen vom Moorhof" ("The Girl from the Marsh Croft", 1935), a court presiding judge in "Der Mann, der Sherlock Holmes war" ("Two Merry Adventurers", 1937), professors in "Die barmherzige Lüge" (1939) and "Robert Koch, der Bekämpfer des Todes" ("Robert Koch: The Battle Against Death", 1939), and the Prussian General Gustav von Manstein in Wolfgang Liebeneiner's "Bismarck" (1940), to name just a few. He also remained active as a stage actor. From 1938 to 1944 he was under contract at the Berlin Schiller Theater under the direction of Heinrich George.

However, Winterstein, who otherwise appeared apolitical, also appeared in Nazi propaganda films: he played a commander of the Burian army in "Ohm Krüger" ("Uncle Kruger", 1941) and a military hospital chief physician in "Stukas" (1941). Towards the end of the war he was put on the 'Gottbegnadeten-Liste' (a list of artists considered crucial to Nazi culture) by Goebbels and his 'Ministry of Public Enlightenment and Propaganda'. His last roles under the Nazi regime included the father of the Baron (Hans Albers) in "Münchhausen" ("The Adventures of Baron Munchausen", 1943), a court president in the judicial drama "Der Verteidiger hat das Wort" (1944) and a doctor in Paul Verhoeven's "Philharmoniker" ("Philharmonic", 1944).

After the end of World War II, Winterstein wrote his memoirs, which he published in 1947 under the title "Mein Leben und meine Zeit." He moved to the GDR and continued to act for several years in both West and East Germany, for example at his former workplace, the Deutsches Theater, as well as at the Volksbühne. Among his most successful and famous stage roles of this period were the title character in Lessing's "Nathan the Wise" and Goethe's "Faust".

In the east-german DEFA productions, Winterstein often embodied humanistic, life-experienced and wise characters. This was also the case in his first, smaller post-war film role as the father of the main character in the East Berlin student drama "...und wieder 48!" (1948), directed by his son Gustav. For his leading role as a humanist-minded professor in the anti-fascism drama "Die Sonnenbrucks" (GDR 1951), he was awarded Best Actor at the Karlovy Vary Film Festival. Other important roles included the wise village priest in "Das verurteilte Dorf" (GDR 1952) and a grumpy, good-natured professor in Konrad Wolf's "Genesung" (GDR 1956).

His son Gustav cast him in the adventure film "Gefährliche Fracht" (1954) and the comedy "Heimliche Ehen" (1956), in which the later star Armin Mueller-Stahl made his feature film debut. Winterstein had his last film role as a nuclear physicist in Kurt Maetzig's science fiction film "Der schweigende Stern" ("First Spaceship on Venus", PL/GDR 1960) based on Stanislaw Lem. After that, the by that time 88-year-old character actor retired. His filmography includes some 240 titles.