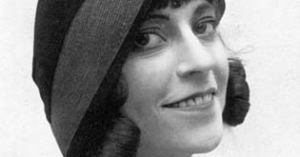 Asta Nielsen was born in Copenhagen on September 11th 1881. Raised in Denmark and Sweden, she went to acting school and became a versatile stage actress. In 1910, she starred in Urban Gad's "Afgrunden", which turned out to be a box-office success. Under exclusive contract, Nielsen relocated to Germany where she quickly gained popularity and eventually rose to international stardom. Nielsen was hailed by critics and audiences for her versatile performances in films like "Nachtfalter", "Der fremde Vogel", "Die arme Jenny" and "Engelein", while her unique looks and physique made her an icon of the silent era of film. After WWI, she performed in films by Ernst Lubitsch and Carl Froelich, and subsequently produced three feature films on her own: "Hamlet", Fräulein Julie" and "Der Absturz".

She later convinced with her gut-wrenching portrayals of desperate lower-class women in G. W. Pabst's "Die freudlose Gasse" and Bruno Rahn's "Dirnentragödie". Gradually she withdrew from filmmaking and returned to the stage. Her last screen performance was in "Unmögliche Liebe", which was also her only sound feature. Politically outspoken, Nielsen was decidedly anti-Hitler and refused to work for the Nazi film industry. She returned to Denmark, but was forced to quit acting during the German occupation. After the war, she began a second career in fine arts and frequently worked for the radio. In 1968, her autobiographical documentary "Asta Nielsen" was released to much acclaim.

Asta Nielsen passed away in Copenhagen on May 5th 1972.