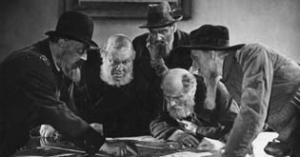 The National Socialist propaganda film with Emil Jannings as the lead was awarded - amongst other decorations - the therefore created title "film of the nation". With a budget of 5.4 million Reichmarks, it was the second-most expensive prestige and propaganda project of the Nazi period; its project is to justify the annihilation politics of the concentration camps, while claiming this to be a creation of the British in South Africa. The historical period is the Boer War (1899-1902); the Boer president and patriarch Paul (Ohm) Krüger campaigns in Europe in vain for the support of his constituents against the English. In flashbacks, Krüger′s conflict with his British rival Cecil Rhodes is well illustrated, as well as the dispute with his initially anglophile son, Jan. In one of the film′s blatantly propagandistic tropes, the cruelty and deceit of the British army simultaneously unites the family in what is in fact a hopeless struggle. The film asserts at the same time that the unsuccessful opposition of the Boers′ was not meaningless: in the last scene of the film, Krüger "prophesies" the downfall of England.