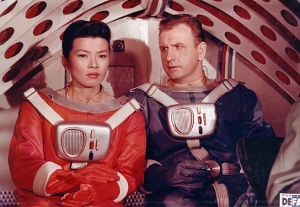 German-Polish science fiction film based on a novel by Stanislaw Lem: In 1970, in the future, an inductor is found during excavations in the Gobi desert. The inductor originates from a space ship that went down at Tunguska in 1908 and contained a message from the planet Venus. Immediately, a team of scientists from earth tries to establish contact to Venus but does not get a reply. A Soviet space ship with an international crew is sent to Venus to solve the mystery of the silent star. The astronauts discover that the habitants of Venus had once planned to attack the Earth but then annihilated themselves with their nuclear weapons. Three astronauts do not manage to get back to the space ship but the rest of the crew returns to Earth.