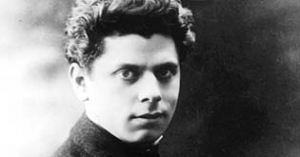 Max Reinhardt (né Maximilian Goldmann) was born on 9 September 1873 in Baden near Vienna as the oldest of seven children of a Jewish merchant family from Hungary. After graduating from school he did an apprenticeship in a bank, while simultaneously taking acting lessons, among others with the conservatory professor Emil Bürde. In 1890 he made his debut at the Fürstlich Sulkowsky Privat-Theater in Vienna and took the stage name Reinhardt. He then got engagements at the Rudolfsheimer Volkstheater and in 1893 at the Stadttheater Salzburg. The director of the Deutsches Theater, Otto Brahm, brought him to Berlin in 1894.

From 1902 Reinhardt also worked as a theater director at different stages. He also became a theater entrepreneur: In 1902 he acquired the cabaret "Schall und Rauch" together with his brother Edmund; followed in 1903 by the Neues Theater, the Deutsches Theater in 1905, the Kammerspiele in 1906, and in 1919 the Große Schauspielhaus. Already in 1911 he co-founded with Edmund the Reinhardt-Bühnen Theaterkonzern. Between 1915 and 1918 he was also the director of the Volksbühne, in 1920 he founded the Salzburg Festival with his production of Hofmannsthal's "Jedermann" ("Everyman"). In Vienna he acquired the Theater in der Josefstadt in 1932 and the Schlosstheater Schönbrunn in 1928. Reinhardt was also committed to the education of the next generation of theater talent. In 1905 he founded the acting school of the Deutsches Theater in Berlin and in 1928 the Max Reinhardt Seminar in Vienna.

Max Reinhardt's consistent turning away from the naturalistic theatre of the 19th century led to his productions being perceived as revolutionary. With numerous innovations such as the use of revolving stages and sophisticated equipment and lighting effects with expressive use of light and shadow, he created an experimental aesthetic that aimed at opulence and emotional intensity of performance, with which Reinhardt also exerted a great influence on film. Numerous actors and directors who originally worked with Reinhardt in theatre went on to have notable careers in film, such as Ernst Lubitsch, F.W. Murnau, Wilhelm Dieterle and Emil Jannings.

In 1910 Reinhardt made his first own film "Sumurûn", an adaptation of a theatre pantomime by Friedrich Freska, still shot with a static camera and considered a fiasco by critics and audience alike. Reinhardt founded his own film company and produced "Das Mirakel" in 1912 based on a stage play by Karl Gustav Vollmöller and his own successful theater production. The medieval Marian legend about a miraculous statue of the Virgin Mary (Maria Carmi) and the young nun Mégildis (Florence Winston) was not filmed in the studio as usual, but on location, with unusual effort and masses of extras. Reinhardt handed over the direction to Michel Carré after several disputes but with the world premiere of the film at Covent Garden Opera House, London, the film celebrated international success with critics and audience.

In 1913 Reinhardt signed a contract with Paul Davidson's projection company "Union" (PAGU) in Berlin for four dramas, but finally Reinhardt dissolved his contract after only two movies, "Die Insel der Seligen" and "Eine venezianische Nacht". "Die Insel der Seligen" (1913), based on a script by Arthur Kahane and directed by Reinhardt with the participation of the painter Paul von Schlippenbach, alternates between the present and antiquity. The presence of mythological creatures such as nymphs and fauns created an erotic atmosphere and motivated several nude scenes, which provoked problems with censorship. The comedy "Eine Venezianische Nacht", also shot in Italy in 1913 and in the studio in Berlin, is based on a pantomime by Karl Gustav Vollmöller and shows, besides Maria Carmi, the young Alfred Abel in his film debut.

After the producer Adolph Zukor took over PAGU in 1920, Max Reinhardt worked on the development of various projects, including a film adaptation of the epic poem "Paradise Lost" by John Milton and a film with Lillian Gish, but none was realised. In 1931 several of Reinhardt's theatres had to close down because of the world economic crisis, in 1932 he gave up the management of his theatre company. After Hitler came to power in 1933 he shifted his work more to Austria and he gave theatrr guest performances in France and the USA.

He only worked as a film director again in 1935 when he shot his only sound film in Hollywood: After a very successful open-air performance of Shakespeare's "A Midsummer Night's Dream" at the Hollywood Bowl, Warner Bros. offered him a contract for three movies, the first one was supposed to become a film version of the play. Reinhardt directed the film together with his student Wilhelm (William) Dieterle, Erich Wolfgang Korngold arranged the music by Felix Mendelssohn Bartholdy. Warner provided a star cast with James Cagney, Olivia de Havilland, Mickey Rooney and Dick Powell. Despite these talents and an almost unlimited budget, expectations were not met and "A Midsummer Night's Dream" remained Max Reinhardt's first and last film for Warner Bros. and his only sound film.

Reinhardt emigrated together with his wife, the actress Helene Thimig, to the USA in 1937. In Hollywood he opened the acting school "Max Reinhardt Workshop for Stage, Screen and Radio" where he and Helene Thimig taught until 1941, when the couple moved to New York. Reinhardt became an American citizen in 1940. However, he was not able to follow up his European successes in the USA.