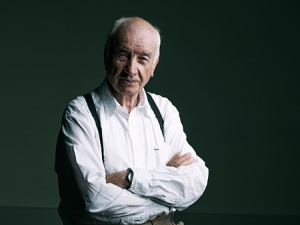 Armin Mueller-Stahl went to school in Prenzlau before he started to study violin and musicology. In 1949, he took his exams as a music teacher. Mueller-Stahl then attended actor's training but was dismissed after one year because of lack of talent. In 1952, he started to perform in Berlin at Theater am Schiffbauerdamm, before he went to Volksbühne in 1954 where he mainly performed in classic plays. From 1955 on, Mueller-Stahl also worked for DEFA and for the GDR television.

In 1960, he received a lot of attention for his part in the multi-part TV movie "Flucht aus der Hölle", directed by Hans-Erich Korbschmitt. Mueller-Stahl also starred in several films by Frank Beyer, for instance, as a Frenchman in "Fünf Patronenhülsen" ("Five Cartridges"), as anti-fascist Michael in "Königskinder" ("Invincible Love"), and as Roman Schtam in "Jakob der Lügner" ("Jakob The Liar"). He made a memorable performance as a blind man in Egon Günther's film "Der Dritte" ("The Third"). Helmut Sakowski, the author of successful "TV novels", wrote several important parts for Mueller-Stahl, including the part of Leßdorff in "Wege übers Land", directed by Martin Eckermann.

Mueller-Stahl became widely popular with multi-part TV movies, including the Fallada adaptation "Wolf unter Wölfen", directed by Hans-Joachim Kasprzik, and as a socialist foil to James Bond in the series "Das unsichtbare Visier", directed by Konrad Petzold. He also starred in entertainment movies such as the western "Tödlicher Irrtum" and left a strong mark in the role of a pediatrician in "Die Flucht" ("The Flight"), directed by Roland Gräf. Mueller-Stahl also worked as a dubbing voice and as a radio announcer, and performed his songs and chansons on stage.

After he publicly protested against the expatriation of Wolf Biermann, Mueller-Stahl did not receive any more role offers. Thus, in 1980, he went to West Germany and wrote the novel "Verordneter Sonntag" about his experiences during that period of time. In West Germany, he was able to continue his movie career without interruption and finally became an international star. His range of TV movies covered everything from crime film to contemporary topics as in "Collin", directed by Peter Schulze-Rohr and based on the novel by Stefan Heym, to documentary features.

Mueller-Stahl played several leading roles in Rainer Werner Fassbinder's films, for instance, in "Lola", a film about the economic recovery in post-war Germany. The film won Mueller-Stahl a German film award and the "Chaplin-Schuh" for his acting performance in 1982. He also appeared in films by Niklaus Schilling, Hans-Christoph Blumenberg, and Alexander Kluge. In 1985, Mueller-Stahl won an award at the Montreal film festival for his performance in "Bittere Ernte". Mueller-Stahl also starred in numerous international productions, including Patrice Chéreau"s film "L'homme blessé". He played a war criminal in Constantin Costa-Gavra's "Music Box", a Jewish patriarch in "Avalon", and an East-German cab driver in New York in Jim Jarmusch's "Night on Earth".

Furthermore, he made his debut as director and writer with the Hitler persiflage "Gespräch mit dem Biest/Conversation with the Beast", a film in which he also played the leading role. During the 1990s, Mueller-Stahl worked alternately in Germany and in the USA where he also appeared in TV productions, for instance, as Rabbi Heller in Joan Micklin Silver's "In the Presence of Mine Enemies" and as the fourth juror in William Friedkin's remake of "12 Angry Men" in 1997, Mueller-Stahl was nominated for an Academy award for his performance as David Helfgott's father in the Australian production "Shine", directed by Scott Hicks. In the same year, he also received two lifetime achievement awards.

In the late 1990s, Mueller-Stahl mainly starred in US productions like "The X-Files – The Movie", directed by Rob Bowman, "The Thirteenth Floor", directed by Joseph Rusnak, and the remake of "Jakob the Liar", directed by Peter Kassowitz. In 2001, he took the role of Thomas Mann in Heinrich Breloer's TV movie "Die Manns – Ein Jahrhundertroman". Seven years later, shortly after his unusual role as a gangster boss in David Cronenberg's "Easter Promises", he stars again in a film by Breloer: in the starstudded adaptation of Mann's novel "Buddenbrooks" Mueller-Stahl plays the family patriarch Johann Buddenbrook.

In 2009, he appeared in a string of high-profile productions, playing a scheming banker in Tom Tykwer's "The International" (USA/DE), a cardinal in Ron Howard's "Illuminati" (USA) and a general in the war movie "Leningrad" (RU/UK).

Almost 80 years old, Mueller-Stahl then semi-retired from acting. In 2014, he received lifetime achievement awards both at the Locarno IFF and the Zurich Film Festival. In 2015, he returned to the big screen to play a priest in Terrence Malick's "Knight of Cups".

As a writer, he reflected on his life and his work and published "Drehtage" (1991), and "Unterwegs nach Hause" (1996). In 1998, he also published the love story "In Gedanken an Marie Louise", followed by the story "Hannah" in 2004. Until today, Armin Mueller-Stahl has starred in more than 130 national and international productions. Besides his acting career, he is also an active painter, writer, and musician.