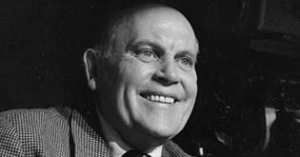 Paul Verhoeven was born in Unna in 1901. Although his family has its origins in the Netherlands, he is not related to the Dutch director (born 1938) of the same name. He grew up in a humble household with 13 siblings, and first aimed at becoming an architect before focussing on his passion for theatre. He didn"t receive a formal stage training, but took lessons from Dortmund actor Karl Wüstenhagen. He took Verhoeven to Munich, where his talent was recognized by theatre manager Hermine Körner. After engagements in Dresden and Frankfurt, he made it to the renowned Deutsche Theater.

Also in the 1930s, his screen career began. He debuted as a movie actor in "Der Kaiser von Kalifornien" (1936), and only one year later made his first feature film as director: "Die Fledermaus" (1937), an adaptation of Johann Strauß" eponymous operetta. During the Nazi years, he mainly directed supposedly "unpolitical" entertainment fare, and continued in this genre after the war.

The American military government installed him as director of the Bavarian state theatre, but due to illness and conflicts with the culture department, Verhoeven resigned from this post in 1948. He continued to act and direct at different theatres in Berlin, Frankfurt and Hamburg, before returning to the Kammerspiele in Munich. His filmmaking career continued in 1949 with "Du bist nicht allein", followed by films like "Wie einst Lili Marleen" (1956) and "Der Fall Mata Hari". He wrote scripts and plays, including the "Kleine Hofkonzert", which was adapted several times. Verheoven was also the president of the "Deutsche Film-Union" and taught at the "Deutsche Institut für Film und Fernsehen" in the 1960s. In 1967, he appeared in the directorial debut of his son Michael Verhoeven.

Paul Verhoeven was married to actress Doris Kiesow. The couple had three children, Lis, Monika and Michael Verhoeven. Lis Verhoeven also became an actress and married Mario Adorf, while Michael Verhoeven first studied medicine and worked as a physician before successfully turning to acting and directing. Paul Verhoeven had another son with Edith Schultze-Westrum.

In 1973, he made his last stage appearance as an actor alongside his friend Heinz Rühmann in "Sonny Boys". Two years later, he suffered a fatal heart attack on the same stage while making a speech to commemorate the deceased actress Therese Giehse.