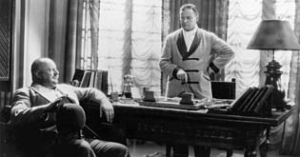 Attorney Dr. Hallers suffers from a double personality. By day, he relentlessly fights crime and prostitution, by night her turns into the "Other" and immerses himself in the milieu of crime and prostitution. He falls in love with the demimondaine Amalie Frieben who he has made enemies in "normal" life. But in the guise of the "Other", she does not recognize him and asks him to kill Hallers. Thus, together with the barkeeper Dickert he breaks into his own apartment. But there he turns back into Hallers and has Dickert arrested. Amalie is able to clear up his double life and Hallers takes up medical treatment.