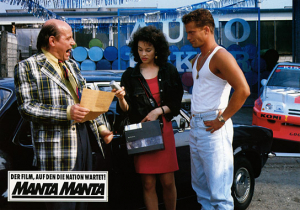 Racin' in the Street

After "Manta - Der Film", the second feature film to respond to the wave of Opel Manta driver jokes that used to be popular in Germany at the time: For Berti and the hairdresser Uschi, who is devoted to him, things seems to be going just fine. Their Opel Manta is in great condition, and in their clique they are surrounded by like-minded people. Gerd, Hakan, the nerdy Klausi and the shy Sabine are all Manta fans and therefore targets of the local radio host and his Manta jokes. But then the events come thick and fast: Berti gets into a race with a Mercedes driver, Uschi throws herself at a Ferrari owner and in the end Klausi of all people has to defend their honor as Manta drivers.