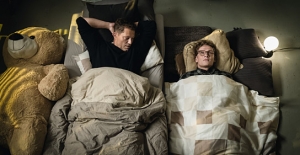 Til Schweiger, Matthias Schweighöfer (from left to right) in "Hot Dog" (2017)

A fast-paced buddy comedy with Germany's most successful stars Til Schweiger and Matthias Schweighöfer – the dream team of German cinema.

The two GSG10 officers Luke and Theo couldn't be any more different, but have to join forces to save Mascha, the daughter of the Moldavian ambassador: chaos is predestined.

Schweighöfer takes on the role of the eager beaver Theo, who has an uncanny photographic memory, and Schweiger plays the smart and tough policemen Luke. In the cource of their investigation, Luke and Theo realize that the demand for ransom is just the tip of the Iceberg and that the kidnapping has far greater reaching implications than initially suspected. During their mission the two opposite characters become an unbeatable dream team and are supported by their hacker colleague Nicki, who even manages to lure the romantically inexperienced Theo out of his reserve...