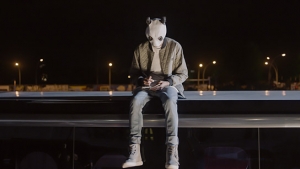 Cro (Carlo Waibel) was born on 31st January 1990 in Mutlangen and already got piano and guitar lessons in his childhood. He started an apprenticeship as an illustrator after graduating from school. From 2006 to 2008, he worked for the online-platfrom "Reimliga Battle Arena" under the name of "Lyr1c". He published his first mix tape "Trash" and changed his showbiz name to 'Cro' in 2009. Hip-Hop-Musician Kaas discovered Cro upon the release of "Trash" and introduced him to an independent record label. Cro signed a contract with "Chimoperator Productions" in 2011.

In the following years, Cro, whose trademark is a panda mask, became a successful rapper who went on tour throughout Germany. He says of his mask that it serves as a kind of protection, enabling him to lead a normal life without being recognized in the public. Between 2011 and 2013, Cro released three mix tapes which were available for free on the internet: "Meine Musik" (2011), "Easy" (2011) and "Sunny" (2013).

His debut album "Raop" was released in July 2012 and got straight to number one at the album charts with more than 500.000 sold copies. His biggest hits were "Du", "Einmal um die Welt" and "Whatever". Cro's second studio album "Melodie" was equally successful and his single "Traum" was sold over 600.000 times. His first live album "MTV Unplugged: Cro" was released in 2015.

Since 2014, the rapper sometimes wears a knitted model of his panda mask. He gave his acting debut in "Unsere Zeit ist jetzt" (2016). In Martin Schreier's film, Cro plans to make his life into a film. He organizes a competition for filmmakers to present him their concepts and ideas of how to realize his ambitious project.