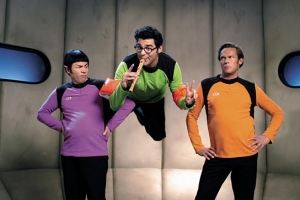 It’s the year 2304, somewhere in space. 300 years ago mankind found, in a UFO that had crash-landed in the Nevada desert, the scientific guidelines which they had used to colonise Mars half a century later. Now the descendants of the first colonists are on their way back to Earth.

Led by the incredibly wicked Regulator Rogul and his even more incredibly wicked disciple Maul, they are up to no good. Quite the reverse: with an armada of spaceships, the Martians are planning to subjugate the blue planet to their red one. The situation for the Earthlings is bleak indeed.

Queen Metapha, ruler of the understandably depressed City of Government, bravely orders the people "Don’t stick the sand in your head". Recognising the hopelessness of their situation, the Senators come up with the doubtful plan to send a delegation back to the past to destroy the UFO so that the colonisation never had happened.

The only Earthlings beyond the reach of the enemy forces and capable of taking on the mission are on the spaceship "Surprise". Unfortunately, Captain Kork, his board engineer Schrotty and First Officer Mr. Spuck are just now busy rehearsing their dance number for the upcoming "Miss Waikiki Pageant". Will they get over their anger at being interrupted and save the world? Will they be able to find their way back to the right period of time to prevent the colonisation?

In his second, in Germany incredibly successful genre parody "Dreamship Surprise", Michael Bully Herbig stops at nothing to keep the audience laughing.