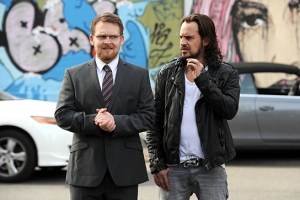 Somehow Till Reiners expected his life to turn out a lot differently. He's in his mid-30s and has been working at the local bank for almost 15 years. He loves his wife Miriam, but when she realizes her dream of becoming a fashion designer, their marriage fizzles. At home, everything revolves around their son Nico. But Till's life changes dramatically when the ex-con Nappo robs his bank one day and takes him hostage.

While the police start their manhunt and Miriam waits on a call from her husband, Nappo hides out with his hostage in a cabin in the woods. The next day he plans to leave Till in the trunk of the car and buy himself a '67 Mustang Fastback with the loot, so that he and his honey-bunny Nadine can take off on a "tour l'amour". But things don’t go according to plan and Till and Nappo have to flee together. At the car dealership, Till proves to be of unusual help, so Nappo gives in and lets him go free. But when Till returns home, Nappo's suspicion that Miriam is cheating on Till seems to prove true, which is quite convenient for Nappo – he needs Till for some illegal business in Amsterdam, but doesn’t realize what a ticking time bomb he has at his side. Till has just one thing on his mind – to make up for everything he has missed out on in life. Not only does he screw up Nappo's holiday plans with Nadine, he also leaves behind a trail of destruction. And in the end, Till realizes that his former life might not have been so bad after all, but returning to it is not so easy…