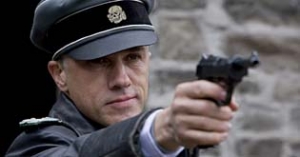 Europe, during World War II. Ever since French Jew Shosanna Dreyfus had to watch how a group of Nazis murdered her family, she has also one thing in mind: She wants to take revenge. Disguised as a cinema operator, she waits for her opportunity to bring down Hans Landa, the SS Colonel in charge of her family′s murder. At the same time, the allied forces put together a special unit of Jewish soldiers. The mission of these men is rather simple: They are assigned to advance behind enemy lines on occupied France and to kill as many Nazis as possible.