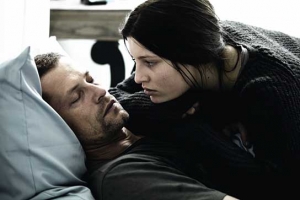 Til Schweiger, let's not mince words here, is Germany's best known and most popular film star. Now "the country's biggest box office draw" (Variety) is back with "Schutzengel", an emotional action drama in which he plays Max, an former special forces soldier hired to protect troubled teen Nina (Luna Schweiger); troubled because she witnessed a brutal murder and some very mean people want her very dead.

Betrayed and on the run from the murdering arms dealer Thomas Backer (Heiner Lauterbach), a man who will stop at nothing and nobody to achieve his goals, loner Max and orphan Nina draw increasingly closer as circumstances forge them from strangers to friends, their insecurity becoming trust, each one relying on the other for protection.

Turning to Max's former comrade-in-arms, the handicapped Rudi (Moritz Bleibtreu), Max and Nina's new found safety proves to be only temporary. Again forced to flee, they seek refuge with Sara (Karoline Schuch), the love of Max's life and, unknown to him, the state prosecutor who has been charged with Nina's witness protection. It’s now a race against time as Sara seeks to bring the two runaways into safety as the vicious Backer pulls out all the stops. Little do Max and Sara know, however, there is a traitor in their ranks. Events pile onto one another, the body count rises until things climax in a furious firefight of a showdown: bullets fly and yet more lives will be lost.

Once again, multi-hyphenate Til Schweiger has assembled an A-list cast of local acting talent for "Schutzengel", this follow-on feature to the hugely successful "Kokowääh" (2010), which held the Number 1 slot in the German film charts for five weeks and drew over 4.3 million admissions. While that film marked the debut of his youngest daughter Emma, this time it is Luna Schweiger who takes her turn before the cameras, playing the fifteen-year-old Nina.

Portrait of Til Schweiger in "German Films Quaterly"