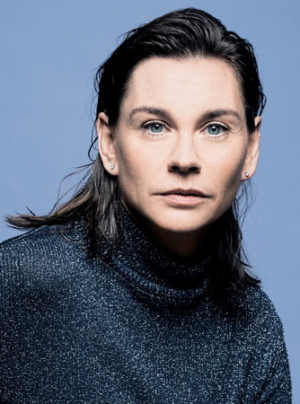 Christiane Paul was born in the East Berlin district of Pankow on March 8th 1974. With her father being a surgeon, and her mother being an anaesthetist, Paul followed family tradition and also entered med school at the Humboldt University in Berlin after graduating from school in 1992.

Immediately after the German reunification, the then 16-year-old took part in a "Miss Vogue" model contest, after which several girl teen magazines booked her for photo shootings. In 1991, she was discovered by director Niklaus Schilling, who cast her in his film "Deutschfieber". Paul followed her debut with the female lead in "Ich und Christine", in which she played alongside Götz George. She finally made her breakthrough performance as the young Sarah in Mark Schlichter's youth drama "Ex", for which Paul received the Max-Ophüls-Award as Best Newcomer. The same year saw her playing an ambitious business woman in the comedy "Workaholic", which brought a Bavarian Film Prize.

Although she was by then widely considered to be one of the promising young talents in German cinema, Christiane Paul nevertheless continued to study at the university and successfully graduated in 1997. She got her M.D. in 1999, after finishing up a thesis on hip prosthetics.

After a small supporting role in "Knockin" on Heaven's Door", she played a prostitute in the raunchy comedy "Dumm gelaufen" ("Gone Wrong"). More rewarding was her starring role opposite Jürgen Vogel in Wolfgang Becker's internationally acclaimed tragicomedy "Das Leben ist eine Baustelle" ("Life is All You Get"). After playing against type as the murderous femme fatale Cora in "Die Häupter meiner Lieben" ("The Heads of My Loved Ones"), Paul convinced audiences and critics alike as the romantic heroine of Fatih Akin's road movie "Im Juli" ("In July").

In 2002, Christiane Paul – who also appeared in several acclaimed TV productions – took a break from acting in order to raise her newborn daughter Masha and to finish her practical training as a physician. In 2005, she impressively returned to the big screen, appearing back to back in the social satire "Im Schwitzkasten" ("No Sweat") and the romantic comedy "Reine Formsache" ("A Mere Formality"). Several other comedies followed, for instance "Vorne ist verdammt weit weg", but Christiane Paul also played a major role in the drama "Die Welle" ("The Wave", 2008) by Dennis Gansel about the emergence of fascist behaviour.

She also appeared in plays, for instance in the 2004 production of Heiner Müller's "Der Auftrag" at the "Haus der Festspiele" in Berlin and the 2008 production of Chekov's "Iwanow" at the Schauspielhaus Düsseldorf.

In 2010, she played a tough police detective in the thriller spoof "Jerry Cotton", the aide to Germany's president in the satire "Der große Kater" ("The Day of Cat"), and was also one of the leads in Vivian Naefe's TV comedy "Der Doc und die Hexe".

Follwing her turns in the TV productions "Die Himmelsleiter" (2015), "Unterm Radar" (2015) and "Mein gebrauchter Mann" (2015) she joined the all-star ensemble of Dani Levy's comedy "Die Welt der Wunderlichs" (2016). The same year, she reprised her role as the human mother of two feisty vampire kids for the third film of the "Vampirschwestern" franchise. Also in 2016 she won an International Emmy Award for her performance in "Unterm Radar" (see above). For "Die Welt der Wunderlichs" she was nominated for the German Film Award in 2017.

On the big screen she then portrayed an explosives expert in Christian Alvart's thriller "Steig. Nicht. Aus! ("Don't. Get. Out!", 2018). In the same year, the TV crime series "Ostfriesenblut" with Paul in the leading role of an ambitious commissioner was launched. The director was Sven Bohse, with whom she subsequently also worked in "Borowski und das Land zwischen den Meeren" (2018), an episode of the popular German "Tatort" crime series. Daniel Harrich's investigative TV drama "Saat des Terrors" showed her in the leading role of a German secret service agent who traces the unlawful ties of international secret services with terrorists. Paul also played a leading role in the eight-part series "8 Tage" by the streaming provider "Sky", which premiered at the Berlinale 2019. At the Munich Film Festival 2019, Florian Koerner von Gustorf's "Was gewesen wäre" ("What Might Have Been") premiered, with Paul in a leading role as a former GDR citizen who after years unexpectedly runs into her first great love. The theatrical release followed in autumn 2019.

Besides acting, Paul gave frequent readings throughout her career and regularly records audio books. In addition, she is still involved in numerous social projects such as World AIDS Day and the initiative "Deine Stimme gegen Armut" ("Your Voice against Poverty").