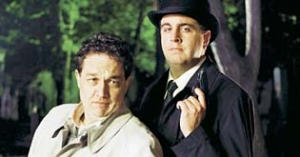 The "Wixxer" strikes again! But who hides behind the mysterious death mask that again spreads fear and terror in London? Scotland Yard sends out his most sharp-witted investigators: scruffy Chief Inspector Even Longer and his tidy partner Inspector Long who is on the Wixxer’s death list, as well as beautiful Victoria Dickham, Longer’s secret lover and the daughter of Lord Dickham, the legendary head of Scotland Yard. Soon, our protagonists stumble into a wild adventure that sees them in monasteries and mental homes, performing karaoke and lambada. –

Just like "Der Wixxer" (2003/04), "Neues vom Wixxer" is a parody but also a sequel to the Edgar Wallace movies of the 1960s and features several cameo appearances by famous TV stars and also Joachim Fuchsberger’s movie comeback after a 25-year hiatus.