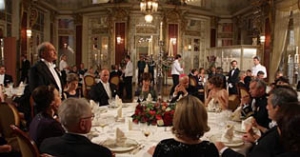 The Day of Cat
The Day of the Cat – inspired by true experiences of Swiss author Thomas Hürlimann – tells a fascinating story of love and political power. The film grants a personal and unusual insight to the life of a statesman, portraying the Swiss Federal President’s last two days in office. While preparing for a royal state reception in honor of the Spanish King, an intrigue is planned behind his back, intending to cause his downfall. Private interests and the struggle for political power get tangled up and result in a dangerous mixture of highly explosive forces.