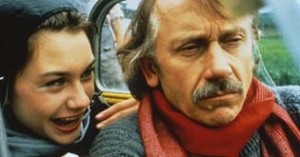 Twelve years before "Deutschfieber", Niklaus Schilling directed "Der Willi-Busch-Report" ("The Willi Busch Report"), a farce focussing on the separation of East and West Germany. In 1992, under new political circumstances, Schilling again presented the events in the small border town of Friedhelm where Willi Busch is jolted out of his retirement in the course of the German reunification process. Not only does Busch’s illegitimate daughter, who has left East Germany, show up, but also his sister, who was his co-editor at the newspaper "Werra-Post", and a former lover return to Friedhelm. The women resurrect the old newspaper but this time the portrayed events are no longer fictional as the political developments unearth enough absurdities to fill a newspaper, among them even artificial beings from a secret GDR lab. At this point, Willi Busch takes action and decides to run for president – of a free Werra republic.