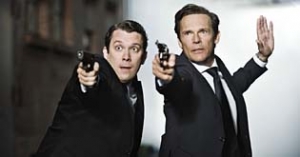 The faultless reputation of New York FBI agent Jerry Cotton is at risk: the Head of Internal Affairs, Daryl D. Zanuck, has accused him of double murder. Did Jerry shoot Sammy Serrano in revenge after being unable to prove the gangster boss guilty of the States Union gold haul? And did he really murder his FBI partner Ted Conroy to get rid of the only witness? A race against time begins for Jerry: he has to get away from his own people at the FBI, track down gangster Klaus Schmidt and his gang, and find the real murderer as soon as possible. Jerry’s only allies are his red Jaguar E-Type, his Smith & Wesson 38, and – of all people – his new partner Phil Decker.