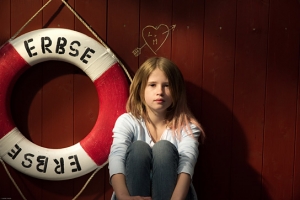 Lola from the Boathouse

Together with her mother Loretta, Lola lives on a house boat called "The Pea". She has no friends other than the presumably crazy, old captain Solmsen. Since her father vanished into thin air, she has become more of an outsider at her school. She wants nothing to change until he comes back. That's why she's still wearing those much-too-small sneakers from the time he vanished. She doesn't want to have her red hair cut, which she dyed previously, and the spot on her neck where her dad placed his last kiss, hasn't been washed in a year. But suddenly two events tear Lola out of her lonely dream world. One: her mother has a new boyfriend. His name is Kurt and he's a vet. Too bad he's pretty nice, because an old dad cannot simply be exchanged and that's why Lola does everything she can to get her mother and Kurt to split, which she almost accomplishes.

And then there is Rebin, the mysterious new student. Rebin is a Kurd and lives illegally in Germany with his parents. Mrs. Kuhbart ['Cow Beard'], the school’s headmaster, has, on her own authority, allowed Rebin to come to school. In the beginning, Rebin is suspicious, but by and by the two outsiders become friends. Rebin doesn't have much free time: he has to deliver newspapers and helps his father clean Mr. Barkelt's restaurant. Barkelt is the president of the Friends of Water Sports Club and wants to build a brand-new cove right in the snazzy marina, where The Pea is anchored.

When Rebin's mother suddenly falls ill and cannot visit a regular physician, Rebin can't attend school anymore and has to take over his mom's job as well. In order to help Rebin, Lola needs to ask her mom's boyfriend Kurt for help, even though she has just managed to get him out of the picture. He's only a vet, but still the only doctor Lola knows whom she trusts. But Rebin's fearful father, who catches them during a visit to the sick mother, does not accept any help and chases them out of the apartment. The next day, Rebin and his family are gone. The apartment appears to be deserted and Lola is convinced she has done everything the wrong way.

Yet, sometimes the world is bigger than you would think.