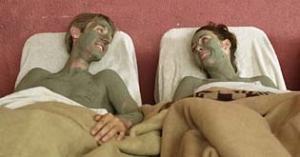 The recession’s got the people in a headlock. They are grappling, struggling, sweating, but there’s no escape. And while they are sweating, why not really sweat? So Toni, Karin, Dani, Monika and Norbert meet regularly every Thursday in the Berlin sauna "Schwitzkasten" (Sweatbox), run by the sister and brother team Nadine and Jost, to brood over the situation in the country and life in general while wallowing in mud pack and massage.

Toni, long-term jobless and impotent, has lost all confidence to return to his old profession. Karin, who has opened her own business, makes a nuisance of herself by trying to sell useless things to anyone who crosses her path. Stewardess Dani, who thinks the best is just about good enough for her, finds out that the world runs on different time when she’s out of work. Monika, incorrigible do-gooder, has enjoyed an academic education with the result that she goes on social welfare until she decides whether to marry and have kids or teach sewing to women in Rwanda. And finally there’s Norbert, the Goethe expert who writes the speeches for his wife, a liberal member of parliament. The microcosm of the sauna opens his eyes to the world as it really is. Will he at least have the courage to do something about it?

In his latest comedy Berlin-based Irish director Eoin Moore presents the naked truth about the state of the nation under the sign of the economic crisis.