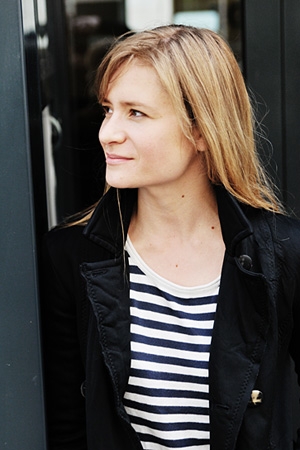 Julia Jentsch, born February 20, 1978, in West Berlin, made her stage debut already in 1995 and caused a stir one year later with her performance as Gretchen in Hofmannsthal's "Urfaust" at Freie Bühne Witzleben. In 1997, Jentsch started to study acting at Hochschule Ernst Busch and successfully graduated four years later. In 2000, while still studying in Berlin, she won the Max Reinhardt prize for her role in "Die Perser" ("The Persians") at Berlin's Maxim Gorki Theater.

In 2001, Jentsch became a cast member of Munich's Kammerspiele where she performed in productions of "Othello" and "Antigone", among others. Jentsch stayed at Kammerspiele until 2006. In 2002, the theatre magazine "Theater heute" named her "Best young actress".

After a couple of TV appearances, Julia Jentsch made her debut on the big screen in 2001 with a role in the youth drama "Mein Bruder der Vampir" ("Getting My Brother Laid"). Three years later, she made her breakthrough performance as a movie actress in the leading role of Hans Weingartner's highly-praised film "Die fetten Jahre sind vorbei" ("The Edukators"). Jentsch won the Bavarian film award and the award of German film critics as "Best young actress" for her portrayal of an ethically ambivalent "metropolitan revolutionary".

Jentsch then caused a stir with her powerful portrayal of resistance fighter Sophie Scholl in Marc Rothemund's film "Sophie Scholl – Die letzten Tage" ("Sophie Scholl – The Final Days", 2005). Besides receiving fulsome reviews, Jentsch won a Silver Bear at the 2005 Berlin film festival, the German film award, the award of German film critics, as well as two European film awards (the jury award as Best actress and the audience award). Despite her overwhelming success, Jentsch then withdrew from the film business to focus on her theatre career.

At the end of 2008, Jentsch returned to the big screen in two ambitious movie productions: In "33 Szenen aus dem Leben" ("33 Scenes From Life"), she portrays an artist who has to cope with a number of strokes of fate, and in Hermine Huntgeburth's Fontane adaptation "Effi", she stars in the title role of Effi Briest.

In 2009, Jentsch starred opposite the late Monica Bleibtreu in the screen adaptation of the novel "Tannöd" ("The Murder Farm"). She went on to appear in films as diverse as "Die Summe meiner einzelnen Teile" (2011), "Hier kommt Lola!" (2010), "Hannah Arendt" (2012), "Der Fall Wilhelm Reich" (2012) and "Kokowääh 2" (2013). Following a leave from acting after the birth of her child, she also resumed her stage career in 2013 and, herself living in Switzerland, performed at the Schauspielhaus Zurich.

For two films of the TV crime series "Kommissar Marthaler" - "Ein allzu schönes Mädchen" (2015) and "Engel des Todes" (2015) -, Jentsch slipped into the role as colleague of the eponymous commissioner. In 2016 she was seen in three highly acclaimed feature films: in the thriller "Auf einmal" ("All of a Sudden") she played the girlfriend of a banker who gets involved in a murderous intrigue; in the award-winning drama "24 Weeks" ("24 Weeks") she impressed critics and audiences alike as a mother-to-be who has to decide whether she wants to give birth to her severely handicapped child; and in the relationship drama "Die Habenichtse" ("The Have-Nots") she played a wife whose relationship is increasingly strained by her husband's heavy sense of guilt.

Together with Anne Zohra Berrached, the director of "24 Wochen", she was awarded the Saarland Medien GmbH Prize of the Günter-Rohrbach-Film-Prize in 2016. In addition, her performance in "24 Wochen" garnered her a nomination for the German Film Award 2017.

Another great success was her role in Hans Christian Schmid's four-parter "Das Verschwinden" (2017), as a mother in the German province whose adolescent daughter disappears without a trace. For her performance, Jentsch was awarded the German Television Prize and the Bavarian Television Prize in 2018. In the same year, she was awarded the Emden Schauspielpreis and the Bundesverdienstkreuz at the Emden-Norderney International Film Festival.

At the beginning of 2019, the first season of the series "Der Pass" ("Pagan Peak"), produced by the streaming channel Sky, was released: Jentsch plays a police inspector from Berchtesgaden, who, together with a colleague from nearby Austria, tracks down a serial killer. Shortly afterwards, Jentsch was seen on the big screen in the social comedy "Frau Mutter Tier" ("Mother Bee"), as a career woman trying to master her job and motherhood.