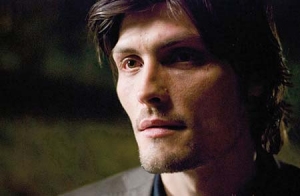 Stipe Erceg, born October 30, 1974, in Split, Croatia, came to Tübingen in 1978 where he grew up. In 1996, Erceg started to study acting at the European Theatre Institute Berlin and graduated four years later. During this time, he already made his stage debut at Berlin's Studiobühne Hanns Eisler in 1998. After several short films and the medium-length film "Der Typ" ("The Man") that won an award at the Berlinale, Erceg made his feature-length debut in 2003 with a leading role in the drama "Yugotrip" – and won the Max Ophuels prize as "Best new actor" for his portrayal of a resorted Bosnian war criminal. In the same year, Erceg made his final breakthrough in the internationally successful, multiple award-winning film "Die fetten Jahre sind vorbei" ("The Edukators"), where he played an idealistic "anti-consumption terrorist" alongside Daniel Brühl and Julia Jentsch.

During the following years, Erceg established a reputation as one of the most talented actors of recent German cinema, always rising to top form when he portrayed damaged, emotionally torn or at least pretty weird characters: For instance, in the episodic film "Stadt als Beute" ("Berlin Stories", 2005), where he played a street hustler, in the TV drama "Kahlschlag" (2006), the sequel to "Der Typ", in the TV film "Ein spätes Mädchen" (2007), or in the RAF drama "Der Baader Meinhof Komplex" ("The Baader Meinhof Complex"), where he portrayed the RAF terrorist Holger "Starbuck" Meins.

Other impressive performances followed: He played the cool ex of a bride-to-be in Friederike Jehn's drama "Weitertanzen" (2008), the brother of a tragically incapacitated cyclist in Matthias Emcke's "Phantomschmerz" ("Phantom Pain", 2009) and a wannabe bank robber in Markus Welter's "Im Sog der Nacht" ("Night Rush", 2009). In 2010, Erceg proved that he is also game to play a highly comical role: In the kid adventure romp "Tiger Team" ("Tiger Team: The Mountain of the 1000 Dragons"), he is hilarious as the never-do-well son of a female super villain.

Since then, Stipe Erceg has starred in two films which each won an award at the Max Ophüls Preis: He was a jaded human trafficker in "Der Albaner" ("The Albanian"), directed by Johannes Naber, and played the role of Croatian sharpshooter in the short "DVA" by Mickey Nedimovic. Moreover, he appeared as a ruthless killer in the international co-production "Unknown Identity" ("Unknown", 2011) and starred in the acclaimed apocalyptic thriller "Hell" by Tim Fehlbaum. He then joined the cast of "Die vierte Macht" ("The Fourth State"), which starred Moritz Bleibtreu and Max Riemelt.

In the thriller "Schilf – Alles, was denkbar ist, existiert" (2012), Stipe Erceg plays the supportive friend of a physics professor whose son is kidnapped under mysterious circumstances.

Also in 2012, Erceg won the Hessian Film Award for his portrayal of a cancer patient in the TV movie "Blaubeerblau" (2011). After playing a militant in the co-production "Opération Libertad" (CH/FR/PT 2012), he starred as a vampire dad in the children's film "Die Vampirschwestern" ("Vampire Sisters"). His next TV roles included a professional hacker in the thriller "Robin Hood" (2013), a mysterious neighbor in "Alaska Johansson" and shaman in "Seegrund. Ein Kluftingerkrimi" (2013).

Following turns in "Die Pilgerin" (2013, TV) and "Vergrabene Stimmen" (2013), Erceg reprised his role of the caring vampire father for the sequel "Die Vampirschwestern 2" ("Vampire Sisters 2"). He then played a burnt-out singer in the TV production "Nobbie Vasquez" (2014), a fashion designer in the German-Australian co-production "Elixir" (2015) and an unsuccessful artist in the film adaptation of Karen Duve's novel "Taxi" (2015). After a supporting role as a Russian prison inmate in "Buddha's Little Finger" (DE/CD 2015), Erceg returned for the third film in "Die Vampirschwestern" ("Vampire Sisters") franchise.