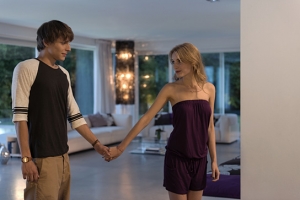 It's something all children do at one time or another (Okay, adults too!), "playing doctor". It’s all part of growing up, is perfectly normal and leaves no lasting mental scars and associated trauma, right? Wrong! Because in the case of Andi, aged six, who played with Lilli, also aged six and the daughter of his mother’s best friend, this innocent game went horribly, tragically wrong when she laughed at the size of his penis and embarrassed him in front of all his birthday guests. Ten years later, today in other words, Andi has still not yet come to terms with the incident and is convinced he is grossly lacking in the endowment department. Not like Bobby, the buff guy at school all the girls have the hots for, Bobby who dominates the changing room after sports practice and is hung like a... You get the picture. Now, with his young hormones past boiling point, Andi is heavily into Katja, who is heavily into Bobby. To make matters worse Lilli, the cause of his grief, who is also sixteen, is coming to Munich to visit them.