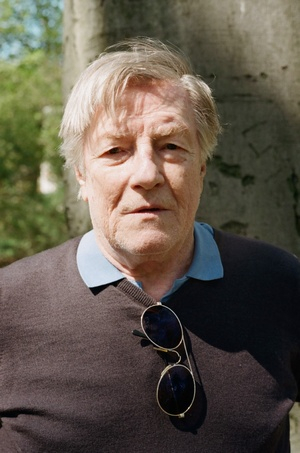 Manfred Zapatka was born on October 2, 1942 in Bremen and grew up in Cloppenburg. He trained at the Schauspielschule Bochum (then: Westfälische Schauspielschule) from 1962 to 1965. During this time, he made his big screen debut with a small appearance in Wolfgang Staudte's "Das Lamm" (1964).

After his training, Zapatka first stood on stage at the Theater Freiburg (1966-68) and the Theater Essen (1968-72). In the mid-1970s he was brought to the Stuttgart Staatstheater by Claus Peymann, who directed politically charged productions. Zapatka and Peymann worked closely together for several years. In parallel, Zapatka played his first TV roles in the 1970s, for example as a detective superintendent in the series "Eurogang" (1975-76) or as a jealous boyfriend in the lesbian love story "Das Ende der Beherrschung" (1976) by Gabi Kubach.

When Claus Peymann left Stuttgart in 1979 under pressure from conservative politicians and moved to the Schauspielhaus Bochum, Zapatka also left the Stuttgart Staatstheater. He went to the Munich Kammerspiele, where he soon became one of the most important actors for the director Dieter Dorn (until his departure in 2001). His most important Munich roles include the Count of Leicester in Schiller's "Maria Stuart" (1979), Robespierre in "Danton's Death" (1980), the title role in Goethe's "Torquato Tasso" (1984) and the title role in the world premiere of Tankred Dorst's "Die Legende vom armen Heinrich" (1997).

Parallel to his theater work, Zapatka also increasingly appeared on both, the big and the small screen from the beginning of the 1980s (i.e. after his move to Munich). In the historical drama "Preußische Nacht" (1981, TV) he portrayed August Wilhelm of Prussia; in Franz Peter Wirth's Goethe adaptation "Egmont" (1982, TV) he played the title role of a count in Spanish-occupied Holland.

Zapatka's breakout role as a screen actor was his first leading role in a feature film: in Sohrab Shahid Saless' "Utopia" (1983), which premiered in competition at the 1983 Berlinale. In it, he played an elegant-looking but extremely brutal pimp who runs a cruel regiment over five prostitutes in a Berlin apartment that has been converted into a brothel. To this day, this role is considered one of Zapatka's strongest performances. He played the implacable pimp Heinz as a cruel mixture of philistine and capitalist.

Despite great critical praise for his intense performance in "Utopia" (and, according to Zapatka, some hostility from viewers who could not distinguish between role and actor), he almost exclusively appearead in TV productions thereafter. Again under te direction of Saless, he starred in the TV relationship drama "Empfänger unbekannt" (1983), in which he played the abandoned husband of the main character, and a few years later he had a supporting role in Saless' social drama "Rosen für Afrika" ("Roses for Africa", 1991, TV).

Zapatka became known to a wider audience through his role as a scheming horse owner in the popular series "Rivalen der Rennbahn" (1989). In the same year, he starred as first lieutenant Karl Krafft in the four-parter "Fabrik der Offiziere" ("The Officer Factory").

On the big screen Zapatka made himself very scarce in the nineties. He portrayed a poet inspired by Bertolt Brecht in Franz Seitz's historical drama "Erfolg" (1991) and a creditor in the neighborhood comedy "Ebbies Bluff" (1993). He had a leading role as a drinking hall regular in "Frankfurter Kreuz" (DE/FR 1998), directed by Romuald Karmakar - who, by his own admission, had been a great admirer of Zapatka's acting skills ever since "Utopia."

Over the next few years, Karmakar and Zapatka worked together several times: In the ensemble of "Manila" (2000), Zapatka played a traveler stranded at the Manila airport; in "Das Himmler Projekt" ("The Himmler Project", 2000), he recited an infamous speech by Heinrich Himmler that lasted several hours - the two received a Grimme Special Award for this film experiment. Karmakar's Jon Fosse adaptation "Die Nacht singt ihre Lieder" ("Nightsongs", 2004) featured Zapatka as the father of Frank Giering's main character; and in "Hamburger Lektionen" ("Hamburg Lectures", 2006), a kind of counterpart to "Das Himmler Projekt," Zapatka read hate sermons by the Hamburg imam Mohammed Fazazi.

In addition, Zapatka also appeared sporadically in feature films by other directors during the 2000s. In Züli Aladag's boxing drama "Elefantenherz" ("Elephant Heart", 2002), he was a shady boxing promoter. In Christoph Hochhäusler's "Falscher Bekenner" ("I Am Guilty", 2005), Matthias Glasner's "Der freie Wille" ("The Free Will", 2006) and Michael Hofmann's "Eden" (DE/CH 2006) he played father figures with highly diverse characters. After a supporting role in the culture-clash comedy "Offset" (2006), he shone in Bastian Günther's tragicomic ensemble film "Autopiloten" ("Autopilots", 2007) as a washed-up pop singer - this part was to remain Zapatka's last big screen role for twelve years.

Instead, he once again concentrated entirely on his television and theater work. In the highly acclaimed crime series "KDD - Kriminaldauerdienst" (2007-2010), he played a leading role as an alcoholic, hot-tempered inspector - for this part he received the Grimme Award in 2008, representing the cast (together with author Orkun Ertener and producer Kathrin Breininger); in 2009 he received the Bavarian Television Award for his "KDD" portrayal.

Zapatka also had series guest roles in "Tatort," "Polizeiruf 110" and "SOKO Leipzig," among others. Important TV drama parts included a professor in the mystery thriller "Schreie der Vergessenen" (2011), an ex-policeman traumatized by an RAF assassination in "In den besten Jahren" (2011), a retired investigator in "Besondere Schwere der Schuld" (2014) and a coldly calculating banker in Marc Bauder's "Dead Man Working" (2016). His TV filmography alone includes over 90 titles (close to 200 if one counts all individual series episodes).

Zapatka remained active as a stage actor. Under the direction of Dieter Wedel, he played Remchingen in a production of "Jud Süß" (at Mannheim Castle in 2011). A longtime ensemble member of Munich's Residenztheater, he appeared in productions of "Robin Hood" (as King John), "The Tempest" (as Prospero) and "The Cherry Orchard" (as Ranyevskaya's brother), among others. In 2018, he was seen in "Insgeheim Lohengrin" and "Junk". Also in 2018, he played a scheming MAD general in the two-part TV thriller "Der Staatsfeind". With Edward Berger's "All My Loving" (2019), he also appeared again in a feature film - in a signature role as an ice-cold, cynical father.

Manfred Zapatka lives in Munich. His daughter Katharina Zapatka (from his first marriage to actress Regine Vergeen) is also an actress.