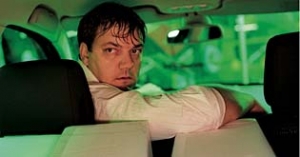 The motorways of the German Ruhr form the point of intersection for four people trying to chase their forgotten ideals. One of them is Georg, a football league team’s trainer. He must win the evening’s game if he is to keep his job. He is about to be given the push and learns just how much the machinations of football business can start to turn against you. Roving television reporter Dieter is on the hunt day and night in search of sensational images. Although he loves his son, who lives with his ex-wife Rita, he doesn’t spend enough time with him. A day together and a terrible experience serve to bring father and son closer together once more. Bigoted bath lift salesman Jörg drifts further and further towards isolation. He is beginning to realise that he cannot keep up his double life any more.

Today it would appear that everything is conspiring against him. Not only is he worried about losing his job; his personal life is also stuck in a rut. German Schlager singer Heinz’s best days are already behind him. Nowadays his only appearances are at shopping mall jubilees and similar events. Although his fans still think of him as a celebrity, he really belongs to a different era and this makes it hard for him to keep up appearances. All four people are insecure heroes just trying to hang on – until the going gets too tough …