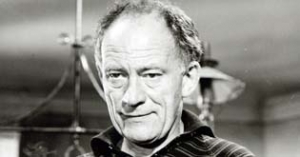 Wolfgang Georg Friedrich Staudte was born October 9, 1906 in Saarbrücken as the son of the actors' couple Fritz Staudte and Mathilde Firmans. In 1912, the family moved to Berlin. Staudte attended Oberrealschule Steglitz and started to study engineering in Oldenburg in 1923. After several performances at the theatre in Schneidemühl, he was signed by Volksbühne Berlin in 1926. From 1931, he also starred in films. In 1933, he was banned from acting on stage. Staudte then started to shoot short, worked as a dubbing voice from 1934 on, and as a radio speaker from 1935 on. Between the years 1935 and 1939, Staudte finished about 100 short commercials for the company Werbeschall Uhlich & Schroeter that was later renamed to Sigma-Film. In 1936/37, he also shot two feature-length film compilations about automobile racing. Until 1942, he starred in several supporting roles, including films with propagandistic tendencies.

In 1942, Tobis accepted one of Staudte's screenplays for the clown Charlie Rivel and he made his debut as a film director with "Akrobat Schö-ö-ö-n". However, his film "Der Mann, dem man den Namen stahl", a farce about bureaucrats, was banned in 1944. Staudte then was supposed to go to war but Heinrich George's wanted him to be the director of "Frau über Bord" and Staudte did not have to go.

In the summer of 1946, Staudte finished the first German post-war film for DEFA. "Die Mörder sind unter uns" ("The Murderers Are Among Us") takes a critical look at contemporary Germany. The film"s story – a returning soldier recognizes an honorable manufacturer as a war criminal and, encouraged by a young concentration camp exempt brings him to justice – calls on new political beginning.

In 1948, Staudte looked into the sources of German fascism in "Rotation" by following the path of life of a print shop employee from the Weimar Republic until the post-war era. In 1951, he made his most convincing film, the Heinrich Mann adaptation "Der Untertan" ("The Kaiser"s Lackey"), a historical satire that makes evident the fatal continuity of philistinism in German history. The film was not shown in Federal Germany until 1957. Furthermore, Staudte finished the children's films "Die Geschichte vom kleinen Muck" ("The Story of Little Mook") and (in the Netherlands) "Ciske – de rat".

Staudte who had already worked in West Germany before continued his career in Federal Germany. At first, he did not succeed to maintain his dedicated perspective and his artistic standards against his producers. "Rosen für den Staatsanwalt" ("Roses for the Prosecutor", 1959) that deals with Nazi continuities in the West German judiciary was his first film that thematically tied in with his earlier works. "Kirmes" ("The Fair", 1960) – produced by Freie Film Produktion GmbH, Hamburg, that was owned by Staudte since 1958 together with Helmut Käutner and Harald Braun – uncovers an "archeologically" suppressed past, while "Herrenpartie" (" Stag Party", 1963/64) observes a travel party that is confronted with "forgotten" wartime atrocities in Yugoslavia.

These films earned Staudte who rejected a German film award for "Rosen für den Staatsanwalt" defamations as "denigrator of his own country". His film "Die Dreigroschenoper" ("Three-Penny Opera"), on the other hand, defuses the original material to a crook ballad. In 1968, Staudte set up the production company Cineforum Film- und Fernsehproduktion GmbH, Berlin. But "Heimlichkeiten" ("Little Secrets"), the company's only production for the movie screen turned into a financial disaster that forced Staudte to work intensively for TV productions from then on. He directed several episodes for the ZDF crime series "Der Kommissar", and from 1973 on, he also directed episodes of "Tatort" for ARD.

Furthermore, Staudte directed the elaborate Jack London adaptations "Der Seewolf" ("The Seawolf", 1971) and "Lockruf des Goldes" ("Burning Daylight", 1974/75), family entertainment like the TV series "MS Franziska" about boatmen on the Rhine river, but also multi-part films like "Die Pawlaks" (1981/82) that strived for historic authenticity. Based on external material, Staudte's works of the time rarely resembled the social dedication of his earlier films.

His last film for the movie screen "Zwischengleis" ("Yesterday's Tomorrow") dealt once again with the problems of guilt and repression during the post-war era and the years of the economic miracle. In his last work, Staudte modified his main topic, the relationship of the German philistine to power, in the Sternheim adaptation "Der Snob" ("The Snob", 1983), starring Klaus Maria Brandauer.

Wolfgang Staudte died on January 19, 1984, from heart failure in Zigarski, Slovenia, during the shooting of the five-part TV movie "Der eiserne Weg".