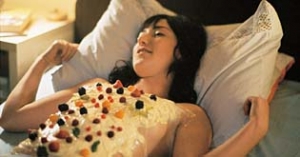 Overweight, eccentric master chef Gregor runs a small private restaurant in a once fashionable health resort in the Black Forest, where he celebrates his brand of "cucina erotica" with an exclusive group of gourmets. At a café in town he meets the married waitress Eden, who has a little daughter, Leonie, with Down’s syndrome. For Leonie’s fifth birthday Gregor bakes a cake decorated with his homemade chocolates. The taste of the chocolates sends Leonie into rapture, and they have the same effect on Eden.

Overwhelmed, she shows up unannounced at Gregor’s house one evening; in a veritable frenzy she devours everything in sight and runs off without a word. They soon overcome their diffidence and begin to meet regularly in Gregor’s kitchen, where Eden delves into Gregor’s sensuous world of savouriness. Their platonic gourmet meetings jolt both Eden and Gregor out of their humdrum lives, and Eden’s marriage blossoms as a result. But nothing remains a secret for long in their town, and after Eden’s husband Xaver experiences the "cucina erotica" for himself, he is forced to take action or else lose his wife.

"The woman’s hair and clothes are a mess, her marriage tedious. The chef is fat and asexual, but a genius in the kitchen," says director Michael Hofmann. "One time she lets him hold her hand. Nothing else happens. But this seeming ′nothing′ is enough to destroy the existence of everyone involved – and will even cost a life. ′Eden′ is a film about the power of love."