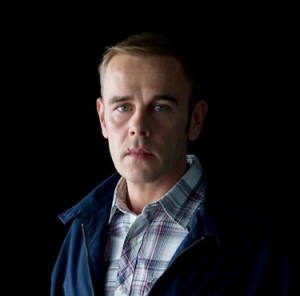 Frank Giering, born November 23, 1971, in Magdeburg, dropped out of Hochschule für Film und Fernsehen "Konrad Wolf" in Babelsberg and started a career as a theatre actor. After a leading role in the TV movie "Der Verräter", director Michael Haneke noticed his talent and cast him for his adaptation of Kafka's "Das Schloss" ("The Castle") and the controversial psychological thriller "Funny Games". In "Funny Games", Giering caused a stir as a sadistic killer lurking beneath a gentle surface.

Giering was widely praised for his performance as Floyd who spends his last night in Hamburg with his friends before leaving his home town for all time, in Sebastian Schipper's melancholic and funny film "Absolute Giganten" ("Gigantic", 1999). Other memorable performances include Giering's parts in "Kaliber Deluxe" ("Bloody Weekend", 2000), and in "Gran Paradiso", where he again played a Neo-Nazi. For this role, Giering was nominated for the award of "best supporting actor" at the 2001 German film award. In 2002, Giering played the title role in Christopher Roth's terrorist drama "Baader", another explosively violent character.

After starring in "Anatomie 2" ("Anatomy 2", 2002), "Hierankl" (2003), and "Dirty Sky" (2003), and making several TV appearances, Giering returned to the big screen in the leading role of a deeply melancholic would-be author who is breaking up with his girl friend in Romuald Karmakar's intimate play "Die Nacht singt ihre Lieder" ("Nightsongs", 2004). Furthermore, Giering, who in his career more often portrayed criminals than police officers, played a police inspector in the ZDF series "Der Kriminalist".